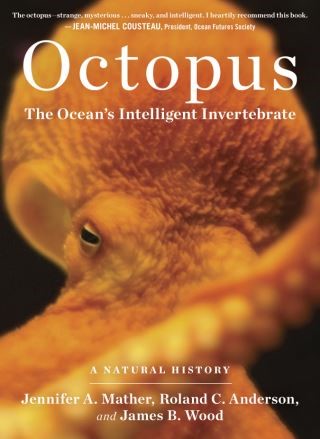 The visually arresting and often misunderstood octopus has long captured popular imagination. With an alien appearance and an uncanny intellect, this exceptional sea creature has inspired fear in famous lore and legends—from the giant octopus attack in 20,000 Leagues Under the Sea to Ursula the sea witch in The Little Mermaid. Yet its true nature is more wondrous still. After decades of research, the authors reveal a sensitive, curious, and playful animal with remarkable intelligence, an ability to defend itself with camouflage and jet propulsion, an intricate nervous system, and advanced problem-solving abilities.

In this beautifully photographed book, three leading marine biologists bring readers face to face with these amazingly complex animals that have fascinated scientists for decades. From the molluscan ancestry of today’s octopus to its ingenious anatomy, amazing mating and predatory behaviors, and other-worldly relatives, the authors take readers through the astounding life cycle, uncovering the details of distinctive octopus personalities. With personal narratives, underwater research, stunning closeup photography, and thoughtful guidance for keeping octopuses in captivity, Octopus is the first comprehensive natural history of this smart denizen of the sea.

Jennifer A. Mather:
Roland C. Anderson, a former biologist at the Seattle Aquarium, has observed octopuses in captivity and in the wild for more than 30 years. He is particularly interested in the natural history, behavior, and aquarium husbandry of marine invertebrates and especially the cold water cephalopods of Puget Sound, about which he has published numerous articles. The son of a sea captain, he grew up near the ocean where he became an avid scuba diver. He retired from the Seattle Aquarium in 2009 after 31 years of service. Long fascinated by malacology (the study of mollusks), he has served as president for the Western Society of Malacologists and the American Malacological Society. He is currently an editor for the journal Diseases of Aquatic Organisms. He received his Ph.D. in Marine Biology from Greenwich University (Hilo, HI) in 2000.
Jennifer A. Mather is a leading researcher on octopuses, concentrating on their behavior and personalities. She has been publishing articles on cephalopods since 1978. At the University of Lethbridge in Alberta, Canada, where she is a professor of psychology, she teaches a variety of courses including studies of aging and perception. Jennifer grew up in Victoria, on the Pacific coast of Canada, where she acquired her lifelong fascination with cephalopods. She prefers to do field research, and has done so in a variety of pleasant locations including Bermuda, Hawaii, and the Caribbean. Besides the comparative study of behavior and cognition, she is interested in the roles and status of women in science and in excellence in university teaching. Jennifer holds a Master’s degree from Florida State University and a doctorate from Brandeis University in Boston. When not working, she’s a dedicated bird watcher and energetic cook and gardener.
James B. Wood is the director of education at the Aquarium of the Pacific in Long Beach, California. An accomplished underwater photographer, he is especially interested in cephalopod behavior, husbandry, and physiology, and science education. Webmaster of The Cephalopod Page (www.thecephalopodpage.org), one of the longest running biological Web sites, James is a founding executive member of MarineBio.org and a staff member of TONMO.com, an online cephalopod enthusiast community. He has worked with the Census of Marine Life since 1998 and codeveloped a pilot species database for cephalopods, CephBase. He earned his Ph.D. in Biology at Dalhousie University. He was previously an assistant research scientist at the Bermuda Institute of Ocean Sciences and an adjunct professor at Duke University.