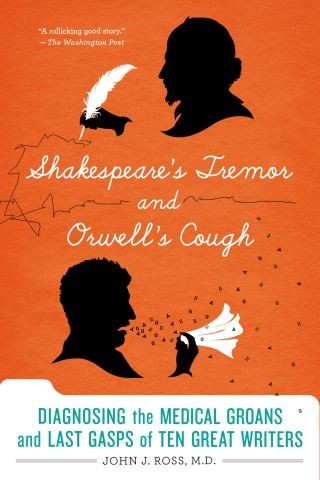 The Medical Lives of Famous Writers

The doctor suddenly appeared beside Will, startling him. He was sleek and prosperous, with a dainty goatee. Though he smiled reassuringly, the poet noticed that he kept a safe distance. In a soothing, urbane voice, the physician explained the treatment: stewed prunes to evacuate the bowels; succulent meats to ease digestion; cinnabar and the sweating tub to cleanse the disease from the skin. The doctor warned of minor side effects: uncontrolled drooling, fetid breath, bloody gums, shakes and palsies. Yet desperate diseases called for desperate remedies, of course.
Were Shakespeare's shaky handwriting, his obsession with venereal disease, and his premature retirement connected? Did John Milton go blind from his propaganda work for the Puritan dictator Oliver Cromwell, as he believed, or did he have a rare and devastating complication of a very common eye problem? Did Jonathan Swift's preoccupation with sex and filth result from a neurological condition that might also explain his late-life surge in creativity? What Victorian plague wiped out the entire Brontë family? What was the cause of Nathaniel Hawthorne's sudden demise? Were Herman Melville's disabling attacks of eye and back pain the product of "nervous affections," as his family and physicians believed, or did he actually have a malady that was unknown to medical science until well after his death? Was Jack London a suicide, or was his death the product of a series of self-induced medical misadventures? Why did W. B. Yeats's doctors dose him with toxic amounts of arsenic? Did James Joyce need several horrific eye operations because of a strange autoimmune disease acquired from a Dublin streetwalker? Did writing Nineteen Eighty-Four actually kill George Orwell? The Bard meets House, M.D. in this fascinating untold story of the impact of disease on the lives and works of some the finest writers in the English language. In Shakespeare's Tremor and Orwell's Cough, John Ross cheerfully debunks old biographical myths and suggests fresh diagnoses for these writers' real-life medical mysteries. The author takes us way back, when leeches were used for bleeding and cupping was a common method of cure, to a time before vaccinations, sterilized scalpels, or real drug regimens. With a healthy dose of gross descriptions and a deep love for the literary output of these ten greats, Ross is the doctor these writers should have had in their time of need.

JOHN J. ROSS is a physician at Brigham and Women's Hospital in Boston and an assistant professor of medicine at Harvard Medical School. He lives in the Boston area with his family.