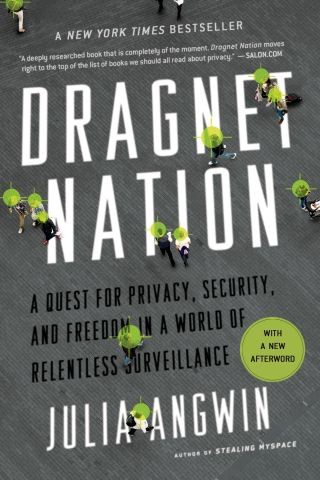 A Quest for Privacy, Security, and Freedom in a World of Relentless Surveillance

An inside look at who's watching you, what they know and why it matters. We are being watched.

We see online ads from websites we've visited, long after we've moved on to other interests. Our smartphones and cars transmit our location, enabling us to know what's in the neighborhood but also enabling others to track us. And the federal government, we recently learned, has been conducting a massive data-gathering surveillance operation across the Internet and on our phone lines.

In Dragnet Nation, award-winning investigative journalist Julia Angwin reports from the front lines of America's surveillance economy, offering a revelatory and unsettling look at how the government, private companies, and even criminals use technology to indiscriminately sweep up vast amounts of our personal data. In a world where we can be watched in our own homes, where we can no longer keep secrets, and where we can be impersonated, financially manipulated, or even placed in a police lineup, Angwin argues that the greatest long-term danger is that we start to internalize the surveillance and censor our words and thoughts, until we lose the very freedom that makes us unique individuals. Appalled at such a prospect, Angwin conducts a series of experiments to try to protect herself, ranging from quitting Google to carrying a "burner" phone, showing how difficult it is for an average citizen to resist the dragnets' reach.
Her book is a cautionary tale for all of us, with profound implications for our values, our society, and our very selves.

Julia Angwin is the author of Stealing MySpace and an award-winning investigative journalist for the independent news organization ProPublica. From 2000 to 2013 she was a staff reporter for The Wall Street Journal, where she was on the team of reporters awarded the 2003 Pulitzer Prize for coverage of corporate corruption and led a team covering online privacy that was a finalist for a 2012 Pulitzer Prize. She lives in New York City with her husband and two children.