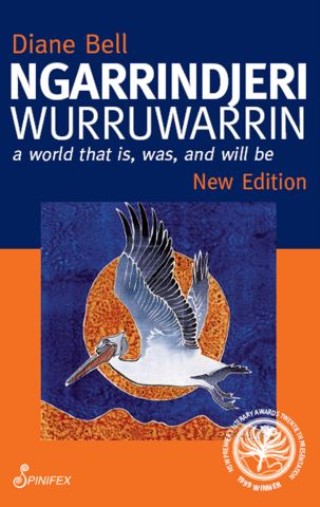 A World That Is, Was, and Will Be

In Ngarrindjeri Wurruwarrin, Diane Bell invites her readers into the complex and contested world of the cultural beliefs and practices of the Ngarrindjeri of South Australia; teases out the meanings and misreadings of the written sources; traces changes and continuities in oral accounts; challenges assumptions about what Ngarrindjeri women know, how they know it, and how outsiders may know what is to be known. Wurruwarrin: knowing and believing.In 1995, a South Australian Royal Commission found Ngarrindjeri women to have “fabricated” their beliefs to stop the building of a bridge from Goolwa to Hindmarsh Island. By 2001, in federal court, the women were vindicated as truth-tellers. In 2009, the site was registered, but scars remain of that shameful moment.In the Preface to the New Edition, Diane Bell looks to the world that “will be”, where talented, committed Ngarrindjeri leaders are building the infrastructure for future generations of the Ngarrindjeri nation and challenging the very foundation of the State of South Australia.The Apology to the Stolen Generations in 2008 and its evocation of an inclusive “us” has propelled the Ngarrindjeri on the path to “practical reconciliation”. But progress has been uneven. Petty politics, procrastinations and prevarications stand in the way of its realisation.Diane Bell writes as an insider who is clear about the bases of her engagement with her Ngarrindjeri friends and colleagues. The story will continue to unfold and Diane Bell will be there. There is unfinished business.

Diane Bell: Over the past four decades, Diane Bell has undertaken extensive fieldwork in communities across the north and in the southeast of Australia as well as comparative research in North America. She has written with passion and courage of matters concerning Aboriginal society with particular emphasis on land rights, native title, law reform, women’s rights, violence against women, religion and the environment. Diane Bell began her working life as a primary school teacher in the 1960s, returned to full time study in the 70s, and as a single mum, completed her BA Hons (Monash University 1975) and PhD (ANU 1981). She has held senior positions in higher education in Australia and the USA, acted as consultant to various NGOs, Indigenous organisations and governmental entities, and has been honoured as a writer, academic and social justice advocate. After 17 years in the USA, Diane retired as Professor Emerita of Anthropology, The George Washington University, DC, USA and, on returning to Australia, settled on the banks of the Finniss River, South Australia, in Ngarrindjeri country. She prepared the Ngarrindjeri Consent Determination Native Title Report, ran for the House of Representatives seat of Mayo (South Australia) in the 2008 by-election, furthered her creative writing as Writer and Editor in Residence at Flinders University, taught at the University of Adelaide and, through membership of various environmental NGOs, argued for a return of water to the Murray-Darling River system.Diane Bell now lives in Canberra where she continues to write, speak, strategise and advocate for a more just society: a concept that underwrites and unifies the various and varied facets of her feminist anthropological stance on life.