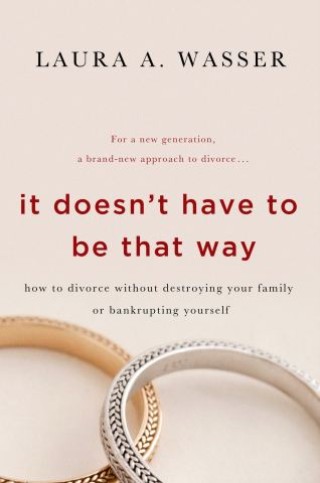 It Doesn't Have to Be That Way

How to Divorce Without Destroying Your Family or Bankrupting Yourself

If anyone ever had a platform to write a how to divorce book for today's generation, it's Laura Wasser. She has been practicing in her field for nearly twenty years, represented many of the country's top celebrities and has been celebrated for her unique style, her empathy and her expertise. Wasser's personal and professional life have been profiled by publications like the Los Angeles Times, Vogue and Interview. Most important, her approach and advice is different from almost any other and she articulates it in a simple manner.

Laura Wasser addresses an entire generation who want—and need—to handle their breakups differently. It's no secret that the divorce rate in America is more than half the marriage rate. Yet the means for dissolving a relationship often seem hopelessly mired in an outdated perception of how it's supposed to be done. Wasser acknowledges that this generation's realities have evolved greatly since the previous generation's in almost every way, and that they want to get divorced cheaply and efficiently and maintain control of the process themselves. The daughter and partner of a prominent Los Angeles Family Law attorney, she has a deep history in the field, and she knows the available roads to uncontested resolution like nobody else. At times psychologist, at times strategist, and distinctly of this generation, Laura and her book will offer readers safer passage through what can be a devastating time, emotionally and financially.

Laura A. Wasser: LAURA WASSER was named one of Hollywood Reporter's 100 Power Lawyers in July 2012, one of the California Daily Journal's Top 100 Lawyers in Sep. 2012, and one of Southern California's Top 50 Women Attorneys for 2012 and 2013. She has been profiled in publications ranging from the Los Angeles Times to Vanity Fair and has represented the likes of Heidi Klum, Ashton Kutcher, Christina Aguilera and Ryan Reynolds, as well as many pro bono clients from the Harriet Buhai Center for Family Law.