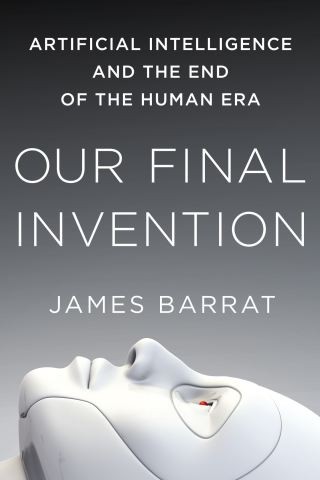 Artificial Intelligence and the End of the Human Era

Artificial Intelligence helps choose what books you buy, what movies you see, and even who you date. It puts the "smart" in your smartphone and soon it will drive your car. It makes most of the trades on Wall Street, and controls vital energy, water, and transportation infrastructure. But Artificial Intelligence can also threaten our existence.

In as little as a decade, AI could match and then surpass human intelligence. Corporations and government agencies are pouring billions into achieving AI's Holy Grail—human-level intelligence. Once AI has attained it, scientists argue, it will have survival drives much like our own. We may be forced to compete with a rival more cunning, more powerful, and more alien than we can imagine.
Through profiles of tech visionaries, industry watchdogs, and groundbreaking AI systems, Our Final Invention explores the perils of the heedless pursuit of advanced AI. Until now, human intelligence has had no rival. Can we coexist with beings whose intelligence dwarfs our own? And will they allow us to?

James Barrat: James Barrat is a documentary filmmaker who's written and produced films for National Geographic, Discovery, PBS, and many other broadcasters in the United States and Europe. He lives near Washington, D.C., with his wife and two children.