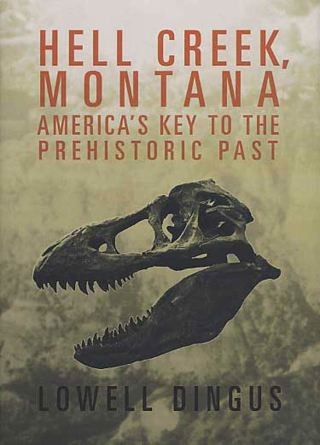 America's Key to the Prehistoric Past

"Given its wide range, this book should attract readers of history and lovers of the American West in addition to dinosaur junkies. " - Publishers Weekly

Hell Creek, Montana, is one of the most windswept, hardscrabble locales in the American West-a quiet town of ranchers, farmers, and others who seek the beauty of the open spaces. It is also the unlikely setting of some of the most fascinating events in the history of the United States and North America. From the first-ever discovery of a Tyrannosaurus rex to Lewis and Clark's landmark expedition; from the Freeman compound standoff to Sitting Bull and Little Big Horn, Hell Creek has been a central player in the events of the last two hundred years-and the last 200 million.

Now, with grace and quiet wit, renowned paleontologist and writer Lowell Dingus takes us on a tour of this desolate, beautiful, out-of-the-way place and illuminates its inhabitants, geology, paleontology, and surprising place in history. Nature lovers, dinosaur buffs, and people fascinated with the turbulent history--both ancient and modern--of the American West will find much to delight them in this journey to Hell Creek.

Dr. Lowell Dingus: Lowell Dingus, Ph.D., is a research associate at the American Museum of Natural History in New York City as well as at the Natural History Museum of Los Angeles County. He has directed numerous significant fossil exhibits and has led various paleontological expeditions around the world, including a 1997 Patagonian excavation that uncovered the first fossilized skin from an embryonic dinosaur. He has coauthored several books, including Walking on Eggs and The Mistaken Extinction.