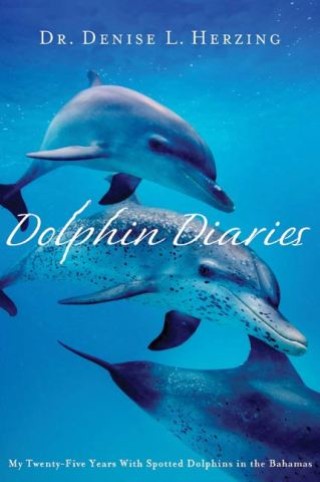 My 25 Years with Spotted Dolphins in the Bahamas

Dr. Denise Herzing began her research with a pod of spotted dolphins in the 1980s. Now, almost three decades later, she has forged strong ties with many of these individuals, has witnessed and recorded them feeding, playing, fighting, mating, giving birth and communicating. Dolphin Diaries is an account of Herzing's research and her surprising findings on wild dolphin behavior, interaction, and communication. Readers will be drawn into the highs and lows—the births and deaths, the discovery of unique and personalized behaviors, the threats dolphins face from environmental changes, and the many funny and wonderful encounters Denise painstakingly documented over many years. This is the perfect book for anyone who loves these incredibly versatile and intelligent creatures and wants to find out more than the dolphin show at the zoo can offer. Herzing is a true pioneer in her field and deserves a place in the pantheon of naturalists and scientists next to Dian Fossey and Jane Goodall.

DR. DENISE L. HERZING is the founder and director of The Wild Dolphin Project, a fellow with the Explorer's Club, a founding member of the Marine Mammal Society, and a professor in biological sciences at Florida Atlantic University. She is the recipient of a 2008 Guggenheim fellowship in Science Writing, and was nominated for a Wings World Quest award. She lives in Palm Beach County, Florida.