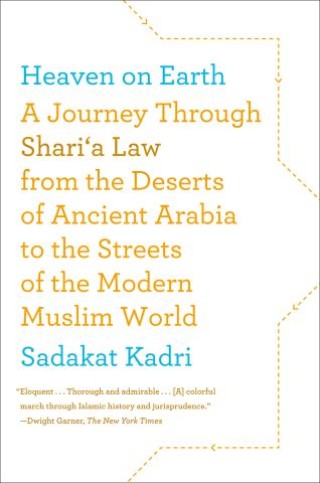 Heaven on Earth is a vivid, revealing, and essential narrative history of shari'a law--the widely contested and misunderstood code of Islamic justice--and how the application of its concepts has changed over time and, with it, the face of Islam.

Some fourteen hundred years after the Prophet Muhammad first articulated God's law--the shari'a--its earthly interpreters are still arguing about what it means. Hard-liners reduce it to amputations, veiling, holy war, and stonings. Others say that it is humanity's only guarantee of a just society. And as colossal acts of terrorism made the word "shari'a" more controversial than ever in the early twentieth century, the legal historian and human rights lawyer Sadakat Kadri realized that many people in the West harbored ideas about Islamic law that were hazy or simply wrong. Heaven on Earth describes his journey, through ancient texts and across modern borders, in search of the facts behind the myths.

Kadri brings lucid analysis and enlivening wit to the turbulent story of Islam's foundation and expansion, showing how the Prophet Muhammad's teachings evolved gradually into concepts of justice. Traveling the Muslim world to see the shari'a's principles in action, he encounters a cacophony of legal claims. At the ancient Indian grave of his Sufi ancestor, unruly jinns are exorcised in the name of the shari'a. In Pakistan's madrasas, stern scholars ridicule his talk of human rights and demand explanations for NATO drone attacks in Afghanistan. In Iran, he hears that God is forgiving enough to subsidize sex-change operations--but requires the execution of Muslims who change religion. Yet the stories of compulsion and violence are only part of a picture that also emphasizes compassion and equity. Many of Islam's first judges refused even to rule on cases for fear that a mistake would damn them, and scholars from Delhi to Cairo maintain that governments have no business enforcing faith.

The shari'a continues to shape explosive political events and the daily lives of more than a billion Muslims. Heaven on Earth is a brilliantly iconoclastic tour through one of humanity's great collective intellectual achievements--and an essential guide to one of the most disputed but least understood controversies of modern times.

Sadakat Kadri: Sadakat Kardri is a practicing English barrister and qualified New York attorney, and the author of The Trial. He has a master's degree from Harvard Law School and has contributed to The Guardian, The Times (London), and the London Review of Books, and he is the winner of the 1998 Shiva Naipaul Memorial Prize for travel writing. He lives in London.