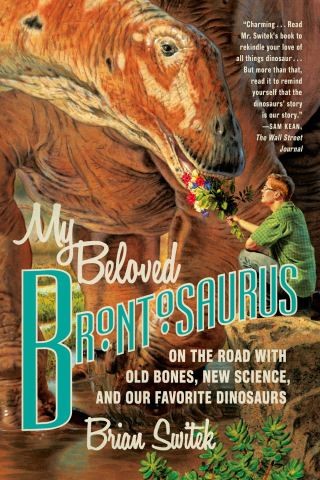 On the Road with Old Bones, New Science, and Our Favorite Dinosaurs

A Hudson Booksellers Staff Pick for the Best Books of 2013

Dinosaurs, with their awe-inspiring size, terrifying claws and teeth, and otherworldly abilities, occupy a sacred place in our childhoods. They loom over museum halls, thunder through movies, and are a fundamental part of our collective imagination. In My Beloved Brontosaurus, the dinosaur fanatic Brian Switek enriches the childlike sense of wonder these amazing creatures instill in us. Investigating the latest discoveries in paleontology, he breathes new life into old bones.

Switek reunites us with these mysterious creatures as he visits desolate excavation sites and hallowed museum vaults, exploring everything from the sex life of Apatosaurus and T. rex's feather-laden body to just why dinosaurs vanished. (And of course, on his journey, he celebrates the book's titular hero, "Brontosaurus"—who suffered a second extinction when we learned he never existed at all—as a symbol of scientific progress.)

With infectious enthusiasm, Switek questions what we've long held to be true about these beasts, weaving in stories from his obsession with dinosaurs, which started when he was just knee-high to a Stegosaurus. Endearing, surprising, and essential to our understanding of our own evolution and our place on Earth, My Beloved Brontosaurus is a book that dinosaur fans and anyone interested in scientific progress will cherish for years to come.

Brian Switek: Brian Switek is an online columnist for National Geographic and is the author of Written in Stone. He has written for Smithsonian, Wired, Slate, The Wall Street Journal, Nature, Scientific American, and other publications. His examinations of fossil discoveries have been featured by the BBC and NPR. He lives in Salt Lake City, Utah.