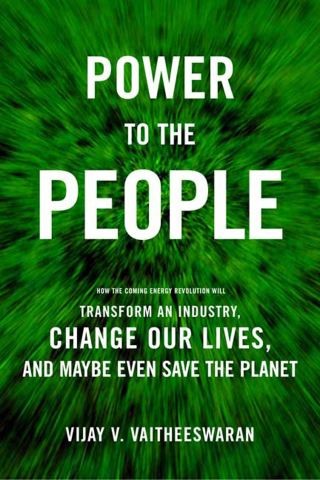 Power to the People

How the Coming Energy Revolution Will Transform an Industry, Change Our Lives, and Maybe Even Save the Planet

Global warming, rolling black outs, massive tanker spills, oil dependence: our profligate ways have doomed us to suffer such tragedies, right? Perhaps, but Vijay Vaitheeswaran, the energy and environment correspondent for The Economist, sees great opportunity in the energy realm today, and Power to the People is his fiercely independent and irresistibly entertaining look at the economic, political, and technological forces that are reshaping the world's management of energy resources. In it, he documents an energy revolution already underway--a revolution as radical as the communications revolution of the past decades.

From the corporate boardroom of a Texas oil titan who denies the reality of global warming to a think tank nestled in the Rocky Mountains where a visionary named Amory Lovins is developing the kind of hydrogen fuel-cell technology that could make the internal combustion engine obsolete, Vaitheeswaran gamely pursues the people who hold the keys to our future.

Man's quest for energy is insatiable. It is also essential. By avoiding the traditional binaries that pit free markets against the wisdom of conservation and the need for clean energy, Power to the People is a book that debunks myths without debunking hope.

Vijay V. Vaitheeswaran: Vijay V. Vaitheeswaran is The Economist's Environment and Energy Correspondent, covering developments in politics, economics, business, and technology as they relate to energy issues. He has received awards for his journalism, and previously wrote about Latin America as the magazine's regional bureau chief in Mexico City. Born in Madras, India, he grew up in Cheshire, Connecticut and graduated from MIT with a degree in mechanical engineering. He now lives in New York.