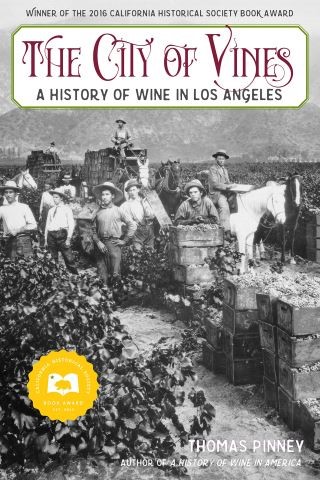 The City of Vines: A History of Wine in Los Angeles

Winner of the 2016 California Historical Society Book Award! The latest title from the author of A History of Wine in America recounts the beginnings of California’s world-renowned wine trade—a story set not in Napa but in the isolated pueblo now called Los Angeles. With incisive analysis and a touch of dry humor, The City of Vines chronicles winemaking in Los Angeles from its beginnings in the late eighteenth century through its decline in the 1950s. Thomas Pinney returns the megalopolis to the prickly pear-studded lands upon which Mission grapes grew for the production of claret, port, sherry, angelica, and hock. From these rural beginnings Pinney reconstructs the entire course of winemaking in a sweeping narrative, punctuated by accounts of particular enterprises including Anaheim’s foundation as a German winemaking settlement and the undertakings of vintners scrambling for market dominance. Yet Pinney also shows Los Angeles’s wine industry to be beholden to the forces that shaped all California under the flags of Spain, Mexico, and the United States: colonial expansion dependent on labor of indigenous peoples; the Gold Rush population boom; transcontinental railroads; rapid urbanization; and Prohibition. This previously untold story uncovers an era when California wine meant Los Angeles wine, and reveals the lasting ways in which the wine industry shaped the nascent metropolis. Published in collaboration with the California Historical Society