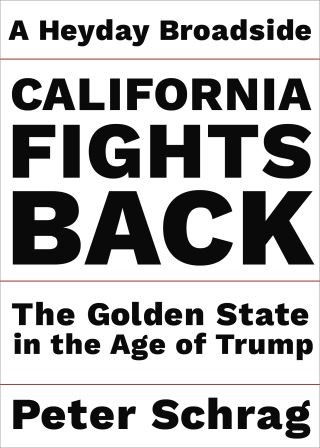 California Fights Back: The Golden State in the Age of Trump

Veteran journalist Peter Schrag argues that California’s role in the era of Donald Trump is twofold: to act as a leader in the resistance to the current administration, and to be held up as an alternative to the course being pursued in Washington. Given the Democratic Party’s stronghold on all statewide elected offices and legislature, it isn’t surprising that California has become a beacon of progressivism. But this is hardly an inevitability. California was almost where much of the GOP wants to take the nation today, leading the country in tax revolt, passage of the Three Strikes criminal sentencing law, and virtual prohibition of bilingual education in public schools. Schrag points to the state’s shifting demographics and the erosion of the Republican Party in the wake of Proposition 187 as two major reasons behind California’s shift to the left. It is particularly pertinent, then, that a state that formerly espoused these values now negotiates with other nations on climate control, asks its agents not to sweep courthouses in search of people to deport, and has approved major tax increases. California Fights Back gives proof that things can be better, and raises the possibility of this becoming the story of other states.

Peter Schrag: Peter Schrag is a journalist, a scholar of Californian politics and political history, and the author of numerous books. His publications include When Europe Was a Prison Camp: Father and Son Memoirs, 1940-41 (Indiana University Press, 2015), Final Test: The Battle for Adequacy in America’s Schools (The New Press, 2005) and Paradise Lost: California’s Experience, America’s Future (The New Press, 1998), which was a New York Times notable book. Schrag served as a columnist and page editor at the Sacramento Bee for nineteen years, and was a visiting scholar at UC Berkeley’s Institute of Governmental Studies from 2011 to 2013.