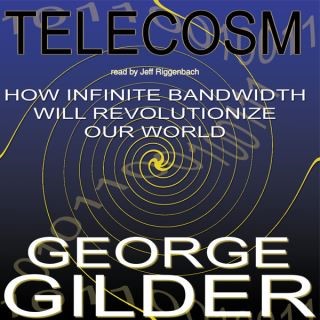 How Infinite Bandwidth Will Revolutionize Our World

The computer age is over. After a global run of thirty years, it has given birth to the age of the telecosm—the world enabled and defined by new communications technology. To seek the key to great wealth and to understand the bewildering ways that high tech is restructuring our lives, look not to chip speed but to bandwidth. Bandwidth is exploding, and its abundance is the most important social and economic fact of our time.

George Gilder is one of the great technological visionaries, famous for understanding and predicting complex technologies as well as for putting it all together in a soaring view of why things change and what it means for our daily lives. He foresaw the power of fiber optics and wireless networks, the decline of the telephone regime, and the explosion of handheld computers; now, he brings you the bible of the new age of communications.

George F. Gilder is a journalist, New York Times bestselling author, and preeminent economic thinker who is credited with helping develop the supply-side economic theory. He has served as chairman of the Lehrman Institute's Economic Roundtable, was program director for the Manhattan Institute, and is the cofounder of the Discovery Institute. He is the author of many popular books and has written for the Wall Street Journal, National Review, Forbes, and other publications. He lives in New York with his wife.

Jeff Riggenbach has narrated numerous titles for Blackstone Audio and won an AudioFile Earphones Award. An author, contributing editor, and producer, he has worked in radio in San Francisco for the last thirty years, earning a Golden Mike Award for journalistic excellence.