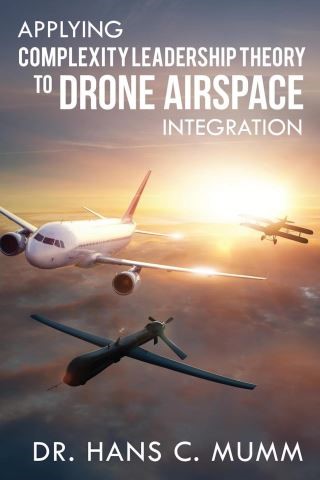 This book examines the leadership challenge created by the requirement to integrate unmanned aerial vehicles (UAVs) into the national airspace system (NAS). The overall lifecycle of leadership does not lend itself to a simple definition or a defined timeline that anyone can follow. As much as society enjoys creating, all of the processes and technology to simplify our lives (although this is debatable), leadership deals with humans and humans are not that simple. The challenge is that the FAA follows a leadership and change management model that is authoritarian, linear, and evolutionary.

Hans C. Mumm: Dr. Hans C. Mumm was a mustang, serving eight years in the enlisted ranks and over eight years as an officer before becoming a wounded warrior and being medically discharged in 2010. Leadership is his passion and has been the key to his success. He served as the officer in charge of the “Iraqi Regime Playing Cards, CENTCOM’S Top 55 Most Wanted List” which was touted by the Defense Intelligence Agency (DIA) as one the most successful Information Operations (IO) in the history of DIA. Dr. Mumm has won numerous awards and accolades for his dedication in supporting homeland security and America’s strategic global position.