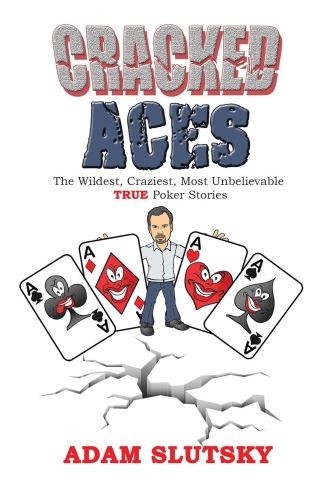 While poker is obviously a card game, I prefer to think of it as a character game. Nowhere else will you find such an interesting and eclectic mix of people like you will at a poker table. It doesn't matter where you play (online, neighborhood home game, legit brick 'n mortar casino cardroom, illicit "underground" game) or what the stakes are (penny-ante or nosebleed) the players are virually interchangeable - diverse backgrounds, varied personas, and everyone has a story. Therein lies the beauty of poker: it's always going to be an adventure. For me, that's the greatest attraction. Not the action occurring in the game but the action of the game. For just like every player has a story, so does every game. Over the years I've had some truly amazing experiences and met a multitude of incredible people courtesy of the game of poker. While most players measure their success (or failure) based on their cash-outs and/or ATM visits, I'd encourage poker players the world over to add a new stat to their general data sheet: the incredulity factor. Simply put, if "it" can happen, it's gonna happen at a poker game!

Adam Slutsky: Hailing from the famed “Borscht Belt” region of Upstate New York’s Catskill Mountains, Adam grew up at the Nevele Resort & Country Club. If you saw Dirty Dancing, you have an inkling of Adam’s upbringing. Adrenaline junkie tendencies and a unique skill set enabled Adam to kick off his literary career penning high octane feature articles for hip men’s lifestyle publications. When editors had a story idea that could get a journalist maimed or killed, they’d usually send Adam. These participatory adventures resulted in Adam being shot, stabbed, tazed, stun-gunned, sapped, brass knuckled, water-boarded, choked out, knocked out, body-slammed, roundhouse-kicked, swimming with great white sharks sans cage, sky-diving sans parachute, BASE-jumping sans sanity, racing through Mexico in the Baja 1000, and racing across the USA in the original variation of the Gumball Rally. Adam has dived for pirate treasure in the Caribbean, dug for buried artifacts in Europe, hunted for poachers guided by mercenaries in Africa, played poker with cartel kingpins in Juarez, thrown dice with Mafia enforcers in Brooklyn, scouted for UFOs with alien abductees in the Sonora Desert and, courtesy of a secondary degree in Cryptozoology from the University of Haiti in Port au Prince, taken part in Sasquatch safaris and other “crypto-quests” around the world.