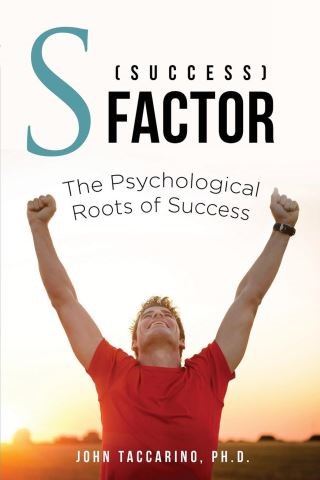 The Psychological Roots of Success

Reading this book could help you to learn how to assess and transform your readiness for success. The Taccarino/ Leonard theory of the S(Success) Factor, based upon a solid foundation of research evidence, can help you to attain a psychological readiness for pursuing success in the areas that mean the most to you.. The book provides a clear and direct method for improving your psychological readiness for success by helping you to assess and strengthen your S-Factor. The book also uses case studies of highly successful people such as Oprah, Grace Kelly, Michael Jordan, Steve Jobs, Jack Ma, Steven King, Marie Curie, Robert Downey, jr. and Tom Brady to illustrate how they have used the powers of their strong S-Factors to overcome obstacles and achieve success at the highest levels. You can use the examples of how they have developed and used their S-Factor strength as models for assisting you to find your own path to success. There is great depth to this book as the case study of Viktor Frankl, for example, suggests how Frankl’s views as expressed in his landmark book, Man’s Search for Meaning, can be blended with the theory of the S-Factor to provide a basis for attaining meaningful success. In a very poignant chapter in our book it is demonstrated how Frankl’s own life depicted enormous S-Factor strength and how he used the power of his S-Factor to make the choices that allowed him to survive the horrors of Auschwitz and help others to survive as well. A similar inspirational story can be found in the life of Steven Douglas who transformed his S-Factor to help him break the break the psychological and physical chains of slavery, but also become a leader of the women’s rights movement in speaking out against all forms of injustice. The book also depicts how families and corporations can effectively develop cultures of S-Factor strength that can lead to generational bases for success.

John Taccarino: Dr. John Taccarino is a nationally known psychologist who received his Ph.D. from Northwestern University. He has been a licensed clinical psychologist and a department chair at DePaul University in Chicago. He has edited or authored some of the most widely used psychological assessments in America and has been profiled in such publication as Who’s in America, Who’s Who in American Education Who’s Who in the World. His other recent books aretitled “The Choices of the Soul”and "S(Success) Factor the Psychological Roots of Success.” He has also developed a number of S-Factor assessments for MirrorWalk. Com in Hong Kong.