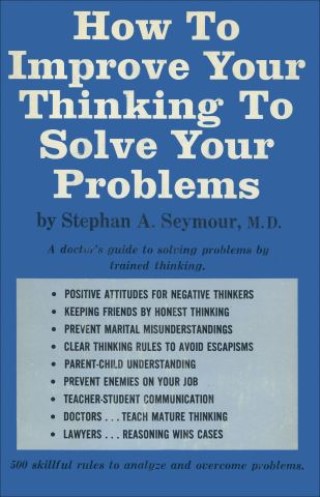 How To Improve Your Thinking To Solve Your Problems

Here is the first book ever written by a practicing physician on the art of logical thinking and its crucial relationship to mental health.

During his years as a hospital chief, Dr. Seymour has seen how often mental trouble and psychosomatic illnesses are rooted in failure to think clearly and communicate accurately. Unable to tackle problems logically and seeking to escape them, too many people fall prey to neuroses, addictions, and other escapism. To help them, the author has developed this powerful program to train people in thinking more effectively and expressing themselves  better.

Dr. Seymour's methods have worked wonders with many maladjusted patients and countless ordinary persons seeking help with problems. This first full explanation of his techniques will interest professional mental-health groups as well as the general reader who wants to improve his reasoning powers.

Dr. Stephan A. Seymour received his M.D. Degree from the California College of Medicine and did graduate work at UCLA and Yale University. He founded the Seymour Hospital and Medical Clinic.

Dr. Seymour was president of the American Academy of Achievement and directed communication seminars between Nobel Prize winners and other award winners. He was also director of the Los Angeles Fitness Council and prepared the "report on the Soft American" for President Kennedy's Fitness Council.

As and athlete, Dr. Seymour was an America javelin record holder and a member of the United States Olympic Team. He received the "Most Inspirational Athlete: award in 1959.