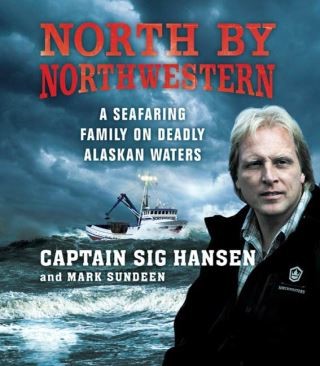 Sig Hansen's rags-to-riches epic of his family's struggle against deadly Alaskan seas and freezing shipwrecks to achieve the American Dream.

Sig Hansen: Sig Hansen is the captain of the commercial fishing vessel Northwestern. With Mark Sundeen, he is the author of North by Northwestern: A Seafaring Family on Deadly Alaskan Waters. Hansen has been featured on Discovery Channel’s Deadliest Catch from the pilot through every season of the show.Rick Adamson has twenty years of experience in voiceovers, spoken word, acting, corporate sales training, and award-winning audiobook narration.  He is a Grammy nominee and an American Library Association award-winning narrator.  Most notably, his work includes reading for authors such as Bill Gates, Al Franken, O. Henry, and Susan Wilson, as well as Fast Food Nation, The Secret, and The Ransom of Red Chief. Adamson has done voiceovers for many Fortune 500 companies such as AT&T Labs, Pfizer, Merrill Lynch Online, Prudential Advisor, and Tyco. As a stage actor, he has performed both in NY theater and regional theater in productions such as You're a Good Man, Charlie Brown, Annie, and Cat on a Hot Tin Roof.Mark Sundeen is a contributor to Outside, New York Times Magazine, National Geographic Adventure, Men's Journal, and McSweeney's. He is the author of The Making of Toro and Car Camping.