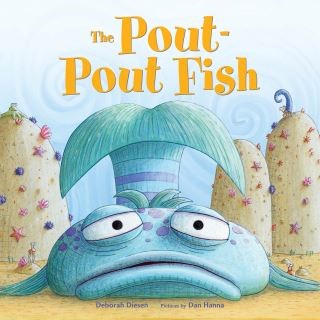 Deep in the water,
Mr. Fish swims about
With his fish face stuck
In a permanent pout.

Can his pals cheer him up?
Will his pout ever end?
Is there something he can learn
From an unexpected friend?

Swim along with the pout-pout fish as he discovers that being glum and spreading "dreary wearies" isn't really his destiny. Bright ocean colors and playful rhyme come together in this fun fish story that's sure to turn even the poutiest of frowns upside down.The Pout-Pout Fish is a 2009 Bank Street - Best Children's Book of the Year.

Deborah Diesen: Deborah Diesen is the author of many children’s picture books, including the New York Times-bestselling The Pout-Pout Fish. She loves playing with words and rhymes and rhythms. She has worked as a bookseller, a bookkeeper, and a reference librarian. She lives in Michigan.Alexander Gould was the voice of Nemo in Disney’s Finding Nemo and Bambi in Bambi II. Other voice-over work includes Curious George. He has appeared in many films and television series.