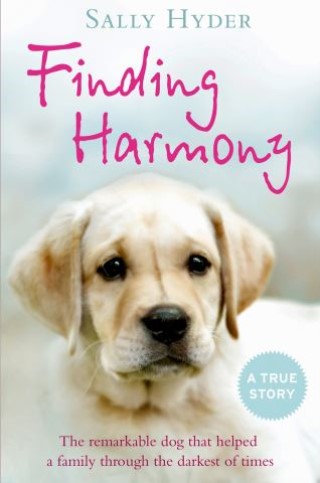 Finding Harmony: The remarkable dog that helped a family through the darkest of times

Heartwarming, inspirational and genuinely touching, Finding Harmony is the remarkable true story of an extraordinary dog that rescued a woman from the depths of depression and transformed a family for ever.A keen mountaineer, Sally Hyder was in her prime and loving life. She shared her passion for climbing with her partner Andrew and it was a dream come true when Andrew proposed at Everest Base Camp. For them, climbing mountains made anything seem possible and represented their attitude to life.But a year after Sally and Andrew were married Sally was diagnosed with Multiple Sclerosis. She was only 28 and was training to be a Macmillan nurse – she wanted to care for the terminally ill. But Sally was determined the disease wouldn't slow her down: she went back to work looking after others and, despite warnings that her condition could deteriorate in pregnancy, went on to have three beautiful children.But it was when her youngest child Melissa was diagnosed with severe autism that Sally began to spiral into depression. Sally felt guilty about the pressures faced by her elder daughter Clara in her role as carer. Sally worried that she was missing out on the freedom of childhood.She needed help. Unsure who to turn to, she happened upon Canine Partners and an extraordinary dog called Harmony. They formed an instant bond; Harmony can perform over 100 chores – from putting groceries into the trolley to handing over Sally's purse at the till. Harmony is an unending source of comfort: she intuitively knows when Sally is in pain and calms Melissa when she suffers panic attacks.Harmony has given Sally the ability to start living once more, and become a mother again in her own way. She has shown Sally that the sky's the limit and, with a taste for independence that she hadn't felt since her mountaineering days, Sally set her sights on the peaks of Ben Nevis once more.In August 2010 Sally planned to climb the hardest of the Munro Mountains. Sadly her first attempt was thwarted after her motorised wheelchair short-circuited. But Sally is a fighter and reached the summit in June 2011 with her husband by her side. And Harmony too, of course.

Sally Hyder: Sally Hyder was only 28 years old when she was diagnosed with Multiple Sclerosis. She was a keen mountaineer and had been training to be a Macmillan nurse to care for the terminally ill. Now confined to a wheelchair, Sally has help with everyday tasks from her Canine Partner, Harmony, who has enabled Sally to lead an independent life. Sally lives in Edinburgh with her husband, Andrew, her three children and Harmony.