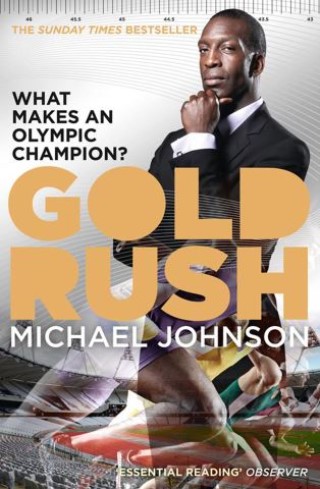 'Elite athletes aren't born. They're made.'Michael JohnsonFrom a living icon of the Olympic Games – as both an athlete and now as a BBC broadcaster – Gold Rush is a compelling analysis of the fascinating combination of psychological and personal qualities, as well as internal and external factors, that go to create an Olympic champion.This exciting new book is based on Michael Johnson's own experiences as an iconic four-time Olympic champion, and on the knowledge he has gleaned as a top-class coach and motivational speaker. It also features, uniquely, more than a dozen exclusive and insightful interviews with Olympic legends from across several different sports who between them have claimed more than 50 gold medals over the past 30 years.In essence, Johnson has assembled his very own Olympic Hall of Fame in assessing the DNA of true champions.Gold Rush is themed around chapters in which Johnson will discuss each of the key qualities/factors. He expertly feeds in fascinating first-person testimonies from the Olympic legends. In the process he builds up a definitive knowledge bank of expertise and experience from athletes who have been on this fascinating journey, encountered the highs and the lows, but ultimately reached the summit - an Olympic gold medal.Johnson's interviewees include: Usain Bolt, Carl Lewis, Sally Gunnell, Seb Coe, Daley Thompson, Cathy Freeman, Ian Thorpe, Michael Phelps, Rebecca Adlington, Chris Hoy, Steve Redgrave, Matthew Pinsent, Lennox Lewis and Michael Jordan.

Michael Johnson: Michael Johnson, 43, is one of the most pre-eminent athletes of all time. He has four Olympic and nine World Championship gold medals to his name. At the 1996 Atlanta Games, he won both the 200m and 400m (the only athlete in history to do this at the same Games), and his world record for 200m of 19.32 stood for 12 years until Usain Bolt broke it at the Beijing Games of 2008. He still holds the world record for 400m – 43.18 seconds.Johnson voluntarily returned his 4x400m relay gold medal from the Sydney Games of 2000 after a team-mate admitted taking performance-enhancing drugs earlier in his career.Following his retirement, Johnson became a sports pundit with the BBC and has since established himself as one of the most popular and renowned sports broadcasters in the UK. The BBC's coverage of Olympic Games and World and European track-and-field Championships is hinged around his contributions.He writes a regular column for The Times and owns his own sports training facility, the Michael Johnson Performance Centre, in Texas.In 2002, he was awarded the Television Pundit of the Year Award by the Royal Television Society.He lives in San Francisco, California.