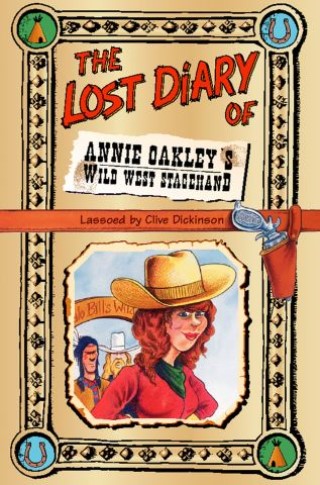 The twelfth Lost Diary about this famous entertainer. Set from 1885 the year in which Annie joined Buffalo Bill’s Wild West Show to 1893 when Annie reached the high point of her career at the Chicago World’s Fair.Annie Oakley ‘s rags-to-riches story is engaging and exciting. She began shooting to provide for the family pot and was soon selling her surplus game to hotels in Cincinnati. Within two years she had made enough money to repay the family mortage! Her name is closely linked with other celebrities of the Old West most notably Buffalo Bill and the great leader of the Sioux nation, Chief Sitting Bull who addopted her as his daughter into the Sioux nation and gave her the nickname Little Sureshot. She was the star attraction in Buffalo Bill’s Wild West Circus in 1885. A role-model for young women in the American West she was also widely admired by boys and young men for her shooting skills.

Clive Dickinson: Clive Dickinson was part of the Complete Editions team, together with Gyles Brandreth and Michele Brown who between them have compiled many books ranging from crosswords to jokebooks; from fact books to fiction. He currently edits many of the Manchester United titles for Madcap Publishing.