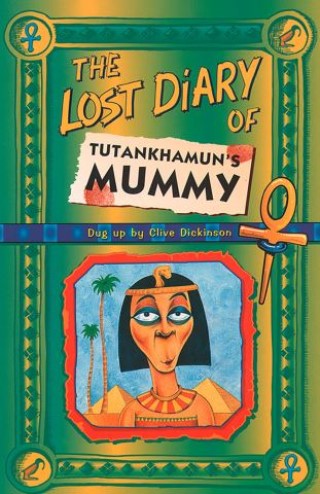 The Lost Diary Of Tutankhamun’s Mummy

ANCIENT EGYPTIAN SCANDAL Nefertidy Tells All!Newly discovered diaries and postcards from Ancient Egypt reveal that King Tutankhamun was a bit of a mummy's boy – but what can you expect from a nine-year-old ruler with a mother like Nefertidy! Astonishing details of life in Ancient Egypt are revealed from a completely different perspective. / Pharaohs and pyramids / Hieroglyphics and hairstyles / Scribes and slaves / Isis, Osiris and all those other gods / Floodings and feasts / Medicine and mummies / Treasures and trophies / And much, much more! You've never read anything like it before!

Clive Dickinson: Clive Dickinson has worked widely in both fiction and non-fiction children’s publishing for twenty years. His novels for Collins include the much loved ‘Knickers, My Secret Notebook Aged 7/8/9’ and ‘The Lost Diary of Tutankhamen’s Mummy,’ from the ‘faction’ series.