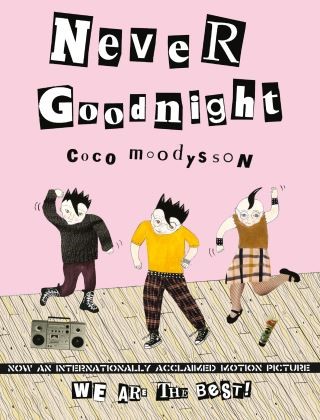 The cult Swedish graphic novel that inspired the critically acclaimed Lukas Moodysson film We Are the Best!Coco, Klara and Mathilda have known each other since primary school, where they met in folk dancing class. Now they’re almost teenagers, and their anarchist ideals and dreams of forming a world-beating punk band set them apart from the other girls at school. They can’t play any instruments, practice with pillows and pans, and keep getting told that punk is dead. But they’re not going to let any of those things get in their way…Published in English for the first time, Never Goodnight is a hilarious and life-affirming memoir which will remind you that all you need in life is your best friends, a can of hairspray and three guitar chords.

Coco Moodysson: Coco Moodysson was born in Stockholm in 1970. For many years she studied to become a sign language interpreter but in 1998 she dropped out and started drawing comics. Her graphic novel Never Goodnight was adapted into the critically acclaimed 2013 film We Are the Best! by her husband, director Lukas Moodysson.Coco lives in Malmö with her husband and their three children.