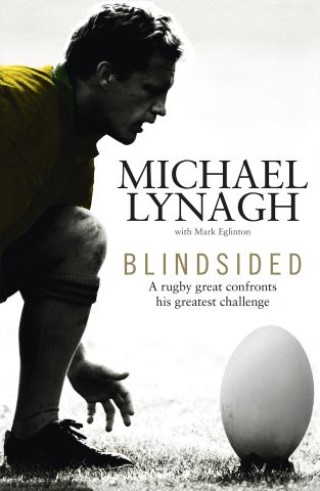 It's the unthinkable - to be  blindsided by a life-threatening illness in the prime of life, with no prior warning. We all hope it doesn't happen, but for some of us, inevitably, life plays out that way.

On an April day like any other in 2012 Michael Lynagh - retired rugby great - set for a successful career in commercial property and rugby analysis was suddenly forced to re evaluate everything. While with friends in Brisbane having a relaxed beer or two, a seemingly fit and healthy Lynagh suffered a stroke and was admitted to the Royal Brisbane Hospital. He was just forty-eight years old and a father of three young boys. Everything about his life and how he viewed it was about to change. For three days, as his brain swelled to the point of catastrophe, his life hung in the balance. What followed is an inspiring story of recovery, rehabilitation and remembering. Blindsided is a life-affirming memoir about luck, family, mates and rugby; and a timely reminder of how you play the game of life, as much as rugby, matters ... even if you happen to be a Wallaby legend.

Michael Lynagh won 72 Test caps and retired from international rugby in 1995 with a world record 911 points scored - a number that remains an Australian record.

Michael Lynagh: Michael Lynagh, 48, won 72 Test caps and retired from international rugby in 1995 as the world record points scorer with 911, a total which remains an Australian record. An inspirational playmaker, Lynagh, who also won 100 caps for Queensland, made his Test debut in 1984 and was part of Australia's Grand Slam-winning team later that year. He was vice-captain of Australia's World Cup-winning side in 1991 and, after captaining Australia to the quarter-finals of the 1995 World Cup, he retired from international rugby and joined Saracens at the start of the professional era.