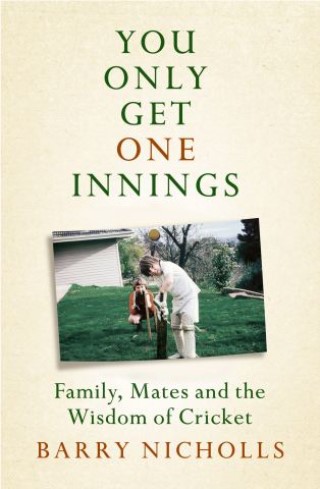 You Only Get One Innings

Deeply personal, always amusing, YOU ONLY GET ONE INNINGS is the story of thousands of cricket tragics growing up in the Australian suburbs in the 70s and 80s. As a young boy growing up in the 1970s in the suburbs of Adelaide, Barry Nicholls was negotiating the dreadful haircuts and unrequited infatuations of adolescence, while his heroes, Chappell, Lillee and thommo, were creating cricket history against Pommie champions like Boycott and Botham. Like thousands of Aussie kids playing cricket at school, in their backyards or on the beach - Barry wanted to be bat like them, bowl like them and play for Australia. But like many boys who dreamed those dreams, he never quite did. But along the way Barry discovered that in the competing, the striving and just having fun with his family, friends and mates - that cricket really can change your life - even if you don't get to play for Australia. A charming coming-of-age memoir set against the Ashes battles of the 70s and 80s that celebrates the eternal wisdom of cricket.

Barry Nicholls: Barry Nicholls, an ABC broadcaster in Western Australia, also presents a national sports-book show for ABC Grandstand. A South Australian-raised schoolteacher turned journalist, he has worked in sports reporting for News Limited and commercial radio; and, as a broadcaster in the Northern Territory, covered all topics from politics to music. He has written four books about sport, most recently FOR THOSE WHO WAIT: THE BARRY JARMAN STORY, which has attracted nationwide media interest on television, radio and in the press. Barry lives in Busselton with his partner Ann and their four children.