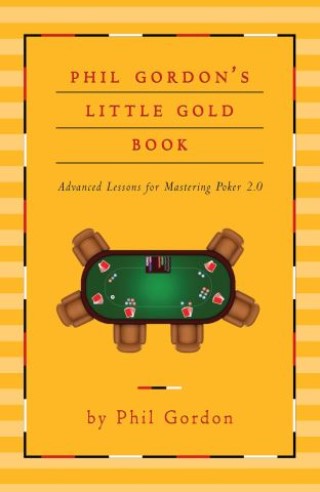 Since reigning poker expert Phil Gordon’s Little Green Book illuminated the strategies and philosophies necessary to win at No Limit Texas Hold’em, poker has changed quickly and dramatically. Today, Pot Limit Omaha is the game of choice at nosebleed stakes. The players are aggressive, the games are volatile, the decisions are tough, and the pressure is relentless. This is Poker 2.0.

In his Little Gold Book, Phil Gordon reexamines the game from the ground up. The key to competing with today’s top players is finding the post-flop edge, but to really understand this new playing style, you need to get comfortable with the underlying math. Don’t be intimidated. Gordon makes this challenging material as approachable and simple as possible. Beginning with the foundations of Poker 2.0, he unpacks the modern poker player’s tool kit, rigorously examines the new lines of play in No Limit Hold’em, dissects the fast and furious strategies of Pot Limit Omaha, and explores the winning poker mind-set that will take your game to an entirely different level.

The golden age of poker is upon us. Phil Gordon’s Little Gold Book will shorten your learning curve, and if you’re willing to put in the time and the work, big bankrolls await.