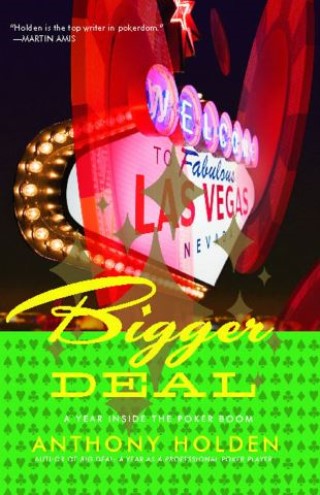 A Year Inside the Poker Boom

In the years since Anthony Holden wrote his classic memoir Big Deal, the poker world has changed beyond recognition. When Holden played in the 1988 World Series of Poker there were 167 starters competing for a prize of $270,000. Since then, poker has become the world's largest single-competitor sport -- at the 2006 World Series there were almost 9,000 players and a first prize of $12 million, the richest in any sport.

What happened in the years between Big Deal and Bigger Deal could never have been predicted: the Internet and television sparked a worldwide explosion in the popularity of poker, one that shows no sign of abating. Poker even has a respectable image these days, much to the disgust of die-hard players. Gone are the seedy rooms of the Horseshoe -- you can't even smoke at the table! -- and you're more likely to find yourself head to head with a film star than an ex-con in Las Vegas.

With the future of online poker now legally endangered in the United States, Holden's vision of the poker boom comes at a critical moment in the game's history. In Bigger Deal, Holden is your guide to the world of the "new" poker -- to the players who dominate the modern game and the personalities behind the multibillion-dollar business it has become -- as he tries once again to win the world title. After all, as Telly Savalas once reminded Holden, a million dollars is never irrelevant. Not to mention twelve...

Anthony Holden: Anthony Holden is an award-winning journalist who has published more than thirty books, including He Played For His Wife…And Other Stories and biographies of Laurence Olivier, Tchaikovsky, and Shakespeare. He has published translations of opera, ancient Greek plays, and poetry. He was director of European Film and Television at Exclusive Media, where he helped relaunch Britain’s most famous film production label, Hammer. Anthony Holden lives in London.