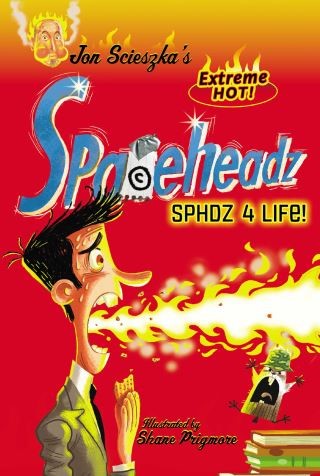 The SPHDZ accomplished their goal of recruiting 3.14 million and one SPHDZ. But the brainwave has been stolen by the chief of the Anti Alien Agency, and it’s up to Michael K., the SPHDZ, and their allies to get it back.

With three potential Chief sightings, the team is spread around the world, leaving Michael K., Venus, TJ, and the SPHDZ to hold down the fort and finish fifth grade. But with a mysterious new principal and graduation fast approaching, will they be able to find the missing brainwave before the Chief uses it to destroy a planet?

Jon Scieszka: Jon Scieszka is the creator of Trucktown, including the New York Times bestselling Smash, Crash!, and the author of The True Story of the 3 Little Pigs!, the Time Warp Trio series, Caldecott Honor Book The Stinky Cheese Man, and many other books that inspire kids to want to read. He has worked as an elementary school teacher and is the founder of GuysRead.com, a literacy initiative for boys.Shane Prigmore is an accomplished professional in the animation, film, and illustration fields. Shane won an Annie Award for his design work on the stop motion feature Coraline. He has also contributed his numerous talents to such projects as: How to Train Your Dragon, The Croods, Rise of the Guardians, Foster’s Home for Imaginary Friends, The Lord of the Rings: The Two Towers, and The Iron Giant...to name a few. Shane resides in Los Angeles.