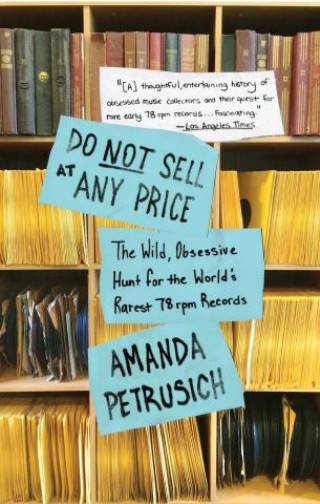 Do Not Sell At Any Price

The Wild, Obsessive Hunt for the World's Rarest 78rpm Records

“A thoughtful, entertaining history of obsessed music collectors and their quest for rare early 78 rpm records” (Los Angeles Times), Do Not Sell at Any Price is a fascinating, complex story of preservation, loss, obsession, and art.

Before MP3s, CDs, and cassette tapes, even before LPs or 45s, the world listened to music on fragile, 10-inch shellac discs that spun at 78 revolutions per minute. While vinyl has enjoyed a renaissance in recent years, rare and noteworthy 78rpm records are exponentially harder to come by. The most sought-after sides now command tens of thousands of dollars, when they’re found at all.

Do Not Sell at Any Price is the untold story of a fixated coterie of record collectors working to ensure those songs aren’t lost forever. Music critic and author Amanda Petrusich considers the particular world of the 78—from its heyday to its near extinction—and examines how a cabal of competitive, quirky individuals have been frantically lining their shelves with some of the rarest records in the world. Besides the mania of collecting, Petrusich also explores the history of the lost backwoods blues artists from the 1920s and 30s whose work has barely survived and introduces the oddball fraternity of men—including Joe Bussard, Chris King, John Tefteller, and others—who are helping to save and digitize the blues, country, jazz, and gospel records that ultimately gave seed to the rock, pop, and hip-hop we hear today.

From Thomas Edison to Jack White, Do Not Sell at Any Price is an untold, intriguing story of the evolution of the recording formats that have changed the ways we listen to (and create) music. “Whether you’re already a 78 aficionado, a casual record collector, a crate-digger, or just someone…who enjoys listening to music, you’re going to love this book” (Slate).

Amanda Petrusich: Amanda Petrusich is the author of It Still Moves: Lost Songs, Lost Highways, and the Search for the Next American Music and Pink Moon, an installment in Continuum/Bloomsbury’s acclaimed 33 1/3 series. Her writing has appeared in The New Yorker, The New York Times, The New York Times Magazine, The Atlantic, Pitchfork, Spin, and The Oxford American, where she is a contributing editor. In 2016, she was named one of the 100 most influential people in Brooklyn culture by Brooklyn Magazine. She holds an M.F.A. from Columbia University, and has received fellowships from the Guggenheim Foundation, the New York Foundation for the Humanities and the MacDowell Colony. An assistant professor in the writing program at NYU’s Gallatin School of Individualized Study, she teaches advanced courses on criticism and musical subcultures. She lives in Brooklyn.