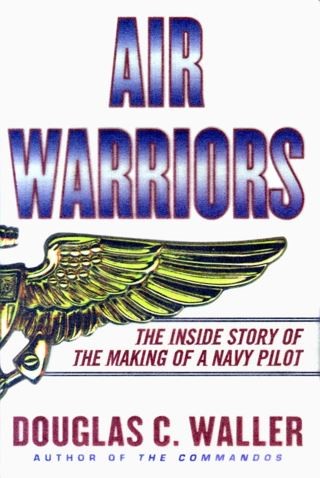 The Inside Story of the Making of a Navy Pilot

Veteran journalist and author of The Commandos Douglas Waller chronicles his rare and intimate experience with the training program for Navy pilots in this “engrossing saga that will likely become an unofficial recruiting tool for naval aviation” (Publishers Weekly).

Waller, who was granted permission to participate in the pilots’ grueling training regime, has written an absorbing behind-the-scenes account of the physical and psychological trials endured by the most specialized group of pilots in military history.

From his bird’s-eye view in the passenger’s seat, Waller follows pilot trainees through two years of intense preparation. He offers vivid illustrations from the fray: hair-raising aerial dogfights; stomach-swallowing dive-bombing runs; high-speed tactical maneuvers grazing the desert floor; and numerous nerve-twisting aircraft carrier takeoffs and landings. In addition to his own experiences and those of the group of trainees he joins, his research is based on interviews with hundreds of other students and their instructors. Hurtling through the air at death-defying speeds, these pilots-in-training struggle to maintain their composure while withstanding conditions that are designed to challenge them to the very limits of human endurance.

Waller’s deftly drawn portraits of the men and women he encounters in this singular culture of elite pilots are as satisfying as his adventure narrative. The pilots, whose grit, determination, and mental agility operate on an elevated threshold, come into sharp focus behind Waller’s keen lens: their aspirations, awe inspiring. Air Warriors combines an examination of the modern Navy, recovering from past sex scandals, with a portrayal of a privileged cadre of men and women whose ambition and commitment coexist within a tightly knit group. Waller is able to capture images of these pilots training, living, and fighting with an acuity and intelligence that are often absent from Hollywood and television treatments of this diverse and fascinating subculture.

Air Warriors takes us inside the cockpit and behind closed doors for the real story of the making of a Navy pilot.

Douglas Waller: Douglas Waller is a former correspondent for Newsweek and Time, where he covered the CIA, Pentagon, State Department, White House, and Congress. He is the author of the bestsellers Wild Bill Donovan, Big Red, and The Commandos, as well as critically acclaimed works such as Disciples, the story of four CIA directors who fought for Donovan in World War II, and A Question of Loyalty, a biography of General Billy Mitchell. He lives in Raleigh, North Carolina.