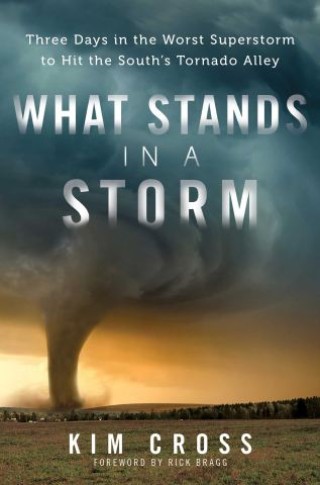 What Stands in a Storm

Enter the eye of the storm in this gripping real-life thriller—A Perfect Storm on land—that chronicles America’s biggest tornado outbreak since the beginning of recorded weather: a horrific three-day superstorm with 358 separate tornadoes touching down in twenty-one states and destroying entire towns.

April 27, 2011 was the climax of a three-day superstorm that unleashed terror from Arkansas to New York. Entire communities were flattened, whole neighborhoods erased. Tornadoes left scars across the land so wide they could be seen from space. But from terrible destruction emerged everyday heroes—neighbors and strangers who rescued each other from hell on earth.

“Armchair storm chasers will find much to savor in this grippingly detailed, real-time chronicle of nature gone awry” (Kirkus Reviews) set in Alabama, the heart of Dixie Alley where there are more tornado fatalities than anywhere else in the US. With powerful emotion and captivating detail, journalist Kim Cross expertly weaves together science and heartrending human stories. For some, it’s a story of survival; for others it’s the story of their last hours.

Cross’s immersive reporting and dramatic storytelling catapult you to the center of the very worst hit areas, where thousands of ordinary people witnessed the sky falling around them. Yet from the disaster rises a redemptive message that’s just as real: in times of trouble, the things that tear our world apart reveal what holds us together.

Kim Cross: Kim Cross is an editor-at-large for Southern Living and a feature writer who has received awards from the Society of Professional Journalists, the Society of American Travel Writers, and the Media Industry Newsletter. Her writing has appeared in Outside, Cooking Light, Bicycling, Runner’s World, The Tampa Bay Times, The Birmingham News, The Anniston Star, USA TODAY, The New Orleans Times-Picayune, and CNN.com. She lives in Alabama.