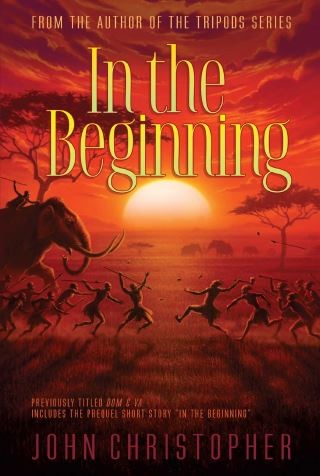 In the beginning, many, many years ago, there were two tribes. Dom was a boy from the hunting tribe, and Va was a girl from the farming tribe. The two tribes fought, but that couldn’t stop Dom and Va from falling in love.

In the midst of battle, Dom escapes and takes Va with him. Together, they journey across the stark landscape of eons past, learning about the harsh and aggressive world around them even as they learn more about the creative and peaceful feelings within themselves.

In the Beginning includes the prequel short story “In the Beginning” and the novel Dom and Va, and marks a captivating departure from John Christopher’s other, futuristic work: this is a tale of the distant past, and of a beginning that represents the conflicts inherent in human nature—and the dark and light in all of us.

John Christopher: John Christopher was the pseudonym of Samuel Youd, who was born in Lancashire, England, in 1922. He was the author of more than fifty novels and novellas, as well as numerous short stories. His most famous books include The Death of Grass, the Tripods trilogy, The Lotus Caves, and The Guardians.