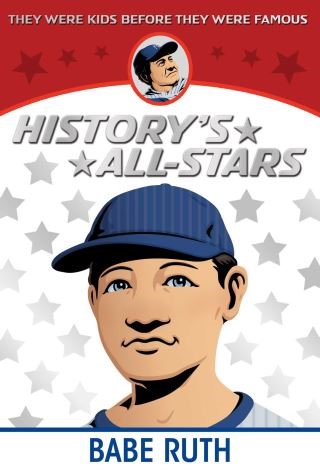 Babe Ruth was one of the first five players inducted into the Baseball Hall of Fame, and for good reason: he broke countless records and hit 714 home runs, an achievement that went unmatched from 1935 until 1974. A legend in baseball and an American icon, Babe Ruth’s impressive tenure with the Red Sox and later the New York Yankees left an enduring legacy.

But did you know that Babe Ruth spent his childhood in an orphanage and reformatory—and that baseball was introduced to him by monks? This narrative biography explores the early life and influences that shaped an athletic boy into an American sports hero.

Guernsey Van Riper Jr.: Guernsey Van Riper, Jr. attended DePauw University in 1926. He earned two varsity letters as quarterback on the football team and one letter as a first baseman on the baseball team. After graduating, he worked in advertising then became an editor at Bobbs-Merrill Publishing Company. He turned his love of sports into books, writing biographies of Lou Gehrig and Knute Rockne along with ten other children’s books.