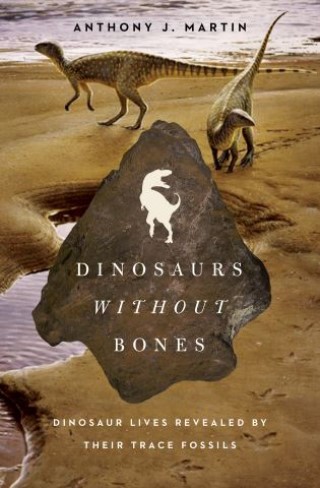 “[Bubbling] over with the joy of scientific discovery. . . . Great fun for anyone looking to revive their childhood dinosaur obsessions.” —Publishers Weekly, starred review

What if we woke up one morning all of the dinosaur bones in the world were gone? How would we know these iconic animals had a 165-million year history on earth, and had adapted to all land-based environments from pole to pole? What clues would be left to discern not only their presence, but also to learn about their sex lives, raising of young, social lives, combat, and who ate who? What would it take for us to know how fast dinosaurs moved, whether they lived underground, climbed trees, or went for a swim?
Welcome to the world of ichnology, the study of traces and trace fossils—such as tracks, trails, burrows, nests, toothmarks, and other vestiges of behavior—and how through these remarkable clues, we can explore and intuit the rich and complicated lives of dinosaurs. With a unique, detective-like approach, interpreting the forensic clues of these long-extinct animals that leave a much richer legacy than bones, Martin brings the wild world of the Mesozoic to life for the twenty-first-century reader.

Anthony J. Martin:
Anthony J. Martin is a professor at Emory University, a paleontologist, geologist, and one of the world’s most accomplished ichnologists. He is the co-discoverer of the first known burrowing dinosaur, found the oldest dinosaur burrows in the geologic record, and documented the best assemblage of polar-dinosaur tracks in the Southern Hemisphere. He is the author of two textbooks on dinosaurs and lives in Atlanta, Georgia.