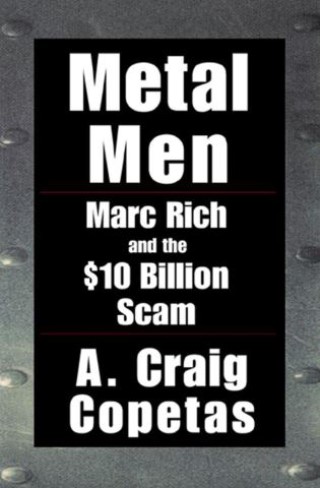 Marc Rich and the $10 Billion Scam

This true story of the multibillionaire who fled to Switzerland “reads like a mystery novel” (USA Today).

How did Marc Rich make over ten billion dollars while paying hardly any taxes? Journalist A. Craig Copetas infiltrated the inner circle of the commodities market and Rich’s associates to show not only how the metals and minerals trader pulled off the scam, becoming one of America’s most wanted criminals, but also how other traders have used the same model to evade taxes as well.

A continuing figure of controversy even after his death, Rich, a hedge fund manager and the founder of Glencore, was wanted for evading almost ninety million dollars in taxes and if caught, could have spent life in prison. From a former staff reporter at The Wall Street Journal, Metal Men is a story of international intrigue spanning the globe, from the inside of the White House to the Kremlin, a brilliantly researched work that exposes the inner workings of one of country’s largest scams.

“Mr. Copetas is at his best evoking the high-stakes, fast-paced life of the commodities traders: the greed and corruption that consume them are the stuff of high drama.” —The New York Times Book Review

A. Craig Copetas:
A. C. Copetas is a senior writer for Bloomberg News. He is the author of Bear Hunting with the Politburo and Metal Men, on pardoned financier Marc Rich. His latest book is Mona Lisa’s Pajamas. Copetas has worked as a staff reporter for the Wall Street Journal, a correspondent for Rolling Stone’s London bureau, an editor at Esquire, Moscow correspondent for Regardie’s magazine, a reporter for the Village Voice, and a contributing writer to Harper’s and the New York Times. He has lived and worked in Russia, China, Great Britain, Latin America, and the Middle East, and now lives in Paris.