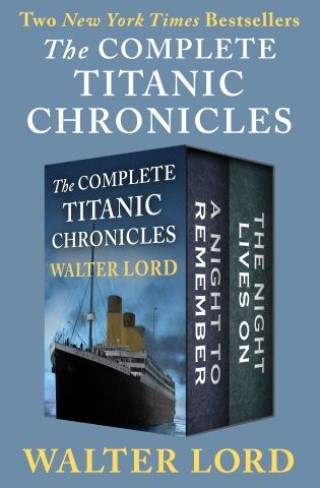 A Night to Remember and The Night Lives On

The complete and definitive New York Times–bestselling chronicle of the Titanic including survivors’ stories and extensive research separating fact from myth.

In just two hours and forty minutes, 1,500 souls were lost at sea when the RMS Titanic succumbed to the icy waters of the North Atlantic. Based on interviews with sixty-three survivors, A Night to Remember tells the story of that fateful night, offering a meticulous and engrossing look at one of the twentieth century’s most infamous disasters.
In The Night Lives On, Lord revisits the unsinkable ship, diving into the multitude of theories—both factual and fanciful—about the Titanic’s last hours. Was the ship really christened before setting sail on its maiden voyage? How did its wireless operators fail so badly, and why did the nearby Californian, just ten miles away when the Titanic struck the iceberg, not come to the rescue?
Together for the first time, Lord’s classic bestseller A Night to Remember and his subsequent study The Night Lives On offer remarkable insight into the maritime catastrophe that continues to fascinate and horrify a full century later.