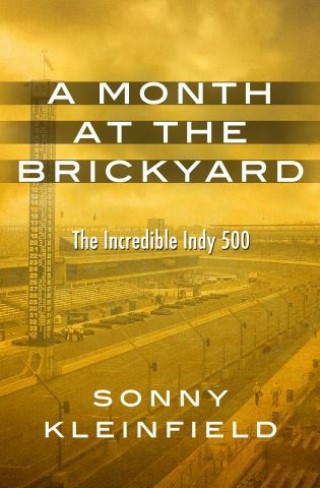 A Month at the Brickyard

An all-access pass to Pit Row and beyond at the world’s most famous auto race, the Indianapolis 500

The Indianapolis 500 auto race is the most prestigious event in all of motor sports. Race cars roar two hundred times around the track at dizzying speeds of more than two hundred miles per hour in front of a massive crowd—and millions more watching on television. Every spring, drivers, teams, sponsors, and pit crews all come together to make auto-racing history. Since the inaugural race in 1911, the Indy 500 has become one of the most popular sporting events in the world.

Award-winning reporter Sonny Kleinfield takes readers inside the world of high-risk, high-speed open-wheel racing. A Month at the Brickyard follows the day-to-day race prep of Indy up-and-comer Johnny Parsons and team, showing the endless fine-tuning and customization up to the big day, as well as capturing the personalities and stories that surround the speedway. With Kleinfield at the wheel, there is much more to racing than just the roar of the engines.

Sonny Kleinfield:
Sonny Kleinfield is a reporter for the New York Times and the author of eight books. He has contributed articles to the Atlantic, Harper’s Magazine, Esquire, and Rolling Stone, and was a reporter for the Wall Street Journal before joining the Times. He shared in a Pulitzer Prize for a Times series on race in America, and has received a number of other accolades, including the Robert F. Kennedy Journalism Award, the Meyer Berger Award, an American Society of Newspaper Editors Award, and the Gerald Loeb Award. A native of Fair Lawn, New Jersey, he is a graduate of New York University and lives in New York City.