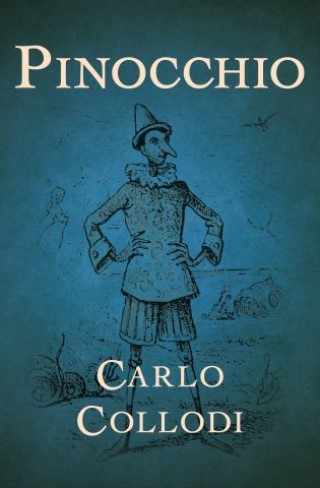 When the poor woodcarver Geppetto builds a lifelike puppet, he doesn’t expect it to become a willful creature who talks back, dances, and generally misbehaves. Determined to have great adventures, Pinocchio runs away. Out in the big world, he makes many animal friends—and enemies—including a cat, a fox, a fire-eater, a giant dog-fish, and sea monsters. He is thrown in jail, stranded on an island of bees, in danger of being fried like a fish, and turned into a donkey. And every time he tells a lie, his nose grows longer. But he wants more than anything to be a real boy.

The classic tale of the rebellious marionette who discovers what it means to be human continues to delight young readers across the world.

Carlo Collodi:
Carlo Collodi (1826–1890) was a pseudonym of Carlo Lorenzini, an Italian children’s author and social commentator. During the Italian Wars of Independence, he served as a volunteer with the Tuscan army. He entered the innovative domain of children’s literature in 1876 with the publication of I racconti delle fate, a translation of French fairy tales. In 1880 he began writing Storia di un burattino (The Story of a Marionette), which was serialized weekly in Il Giornale per i bambini, the first Italian newspaper for children, before being published as The Adventures of Pinocchio in 1883. It was translated into English in 1892. Lorenzini died in Florence, unaware of the fame and popularity that awaited what would become his seminal work.