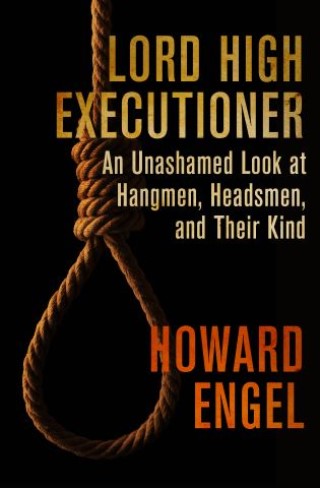 An Unashamed Look at Hangmen, Headsmen, and Their Kind

A grisly tour of hangings, electrocutions, beheadings—and other state-sanctioned deaths that are part of the long history of the death penalty.

In Lord High Executioner, award-winning writer Howard Engel traces the traditions of capital punishment from medieval England and early Canada to the present-day United States. Throughout “civilized” history, executioners employed on behalf of the kingdom, republic, or dictatorship have beheaded, chopped, stabbed, choked, gassed, electrocuted, or beaten criminals to death—and Engel doesn’t shy away from the gritty details of the executioner’s lifestyle, focusing on the paragons, buffoons, and sadists of the dark profession.

Packed with all-too-true stories, from hapless hangings to butchered beheadings, this historically accurate look at the executioner’s gruesome work makes for a thoroughly gripping read.

Howard Engel:
Howard Engel (1931–2019) was born in St. Catharines, Ontario. He was a producer for the Canadian Broadcasting Corporation before emerging as a prolific, award-winning, and much-loved mystery writer, best known for the Benny Cooperman detective novels. After suffering a stroke, Engel developed alexia sine agraphia in 2000, a condition that prevented him from reading without great effort. This, however, did not inhibit his ability to write, and he later penned a memoir about the experience and his recovery called The Man Who Forgot How to Read. Engel was a founder of Crime Writers of Canada, and in 2014, he was the recipient of the organization’s first Grand Master Award. He passed away in 2019 at the age of eighty-eight.