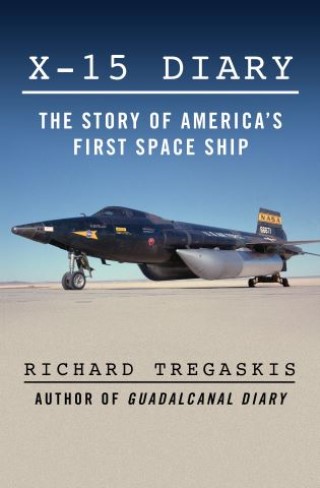 The riveting true story of the world’s fastest plane and the first manned flights into outer space.

First tested in 1959, the X-15 rocket plane was at the forefront of the space race. Developed by the US Air Force and the National Aeronautics and Space Administration (NASA) in collaboration with North American Aviation, the X-15 was sleek, black, and powerful—a missile with stubby wings and a cockpit on the nose. By 1961 it could reach speeds over three thousand miles per hour and fly at an altitude of thirty-one miles above the earth’s surface—the lower reaches of outer space.

Acclaimed journalist and bestselling author Richard Tregaskis tells the story of the X-15’s development through the eyes of the brave pilots and brilliant engineers who made it possible. From technological breakthroughs to disastrous onboard explosions to the bone-crushing effects of intense g-force levels, Tregaskis captures all the drama and excitement of this crucial proving ground for the Mercury, Gemini, and Apollo missions.

X-15 Diary recounts a thrilling chapter in the history of the American space program and serves as a fitting tribute to the courageous scientists and adventurers who dared to go where no man had gone before.

This ebook features an illustrated biography of Richard Tregaskis including rare images from the American Heritage Center at the University of Wyoming.

Richard Tregaskis:
Richard Tregaskis (1916–1973) was a journalist and award-winning author best known for Guadalcanal Diary (1943), his bestselling chronicle of the US Marine Corps invasion of the Solomon Islands during World War II. Born in Elizabeth, New Jersey, Tregaskis graduated from Harvard University and reported for the Boston American before joining the International News Service. Assigned to cover the Pacific Fleet operations after Pearl Harbor, he was one of only two reporters to land with the Marines on Guadalcanal Island. His dramatic account of the campaign was adapted into a popular film and became required reading for all Marine Corps officer candidates. Invasion Diary (1944) vividly recounts the Allied invasions of Sicily and Italy and Tregaskis’s brush with death when a chunk of German shrapnel pierced his skull. Vietnam Diary (1963) documents the increased involvement of U.S. troops in the conflict between North and South Vietnam and was awarded the Overseas Press Club’s George Polk Award. Tregaskis’s other honors include the Purple Heart and the International News Service Medal of Honor for Heroic Devotion to Duty. He traveled the world many times over, and wrote about subjects as varied as the first space ship (X-15 Diary, 1961), John F. Kennedy’s heroism during World War II (John F. Kennedy and PT-109, 1962), and the great Hawaiian king Kamehameha I (Warrior King, 1973). On August 15, 1973, Tregaskis suffered a fatal heart attack while swimming near his home in Hawaii. After a traditional Hawaiian funeral, his ashes were scattered in the waters off Waikiki Beach.