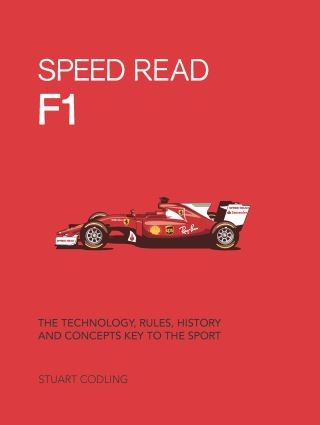 The Technology, Rules, History and Concepts Key to the Sport

Don't be intimidated by F1, Speed Read F1 is your guide to this great sports tech, rules, history, culture and concepts in one stylish, easy-to-read package.

Stuart Codling: Stuart CodlingÆs and James MannÆs previous Motorbooks title, Art of the Formula 1 Race Car received the "Best of Books" award for 2010 from the International Society for Vehicle PreservationÆs International Automotive Media Awards competition. A journalist and broadcaster, Stuart Codling has worked in motorsport and automotive writing for more than a decade, covering sports car racing in the United States before joining F1 Racing, the worldÆs biggest-selling Formula 1 magazine, in 2001. He has appeared as an F1 expert on TV and radio, hosted for Renault F1, and contributes to F1 Racing, Autosport, Autocar and the Red Bulletin. He is the author of the Motorbooks best-seller Real Racers: Formula 1 Racing in the 1950s and 1960s. He lives in Farnham, Surrey, England. www.stuartcodling.com James Mann is one of the worldÆs leading car and motorcycle photographers, with more than twenty years of experience shooting for car and bike publications, the motor industry, and businesses all over the world. His work has appeared within and on the covers of more than forty books and has provided stunning visuals for numerous magazines, including Classic and Sportscar, CAR magazine, Automobile Quarterly, Autocar, Motorsport, Automobile magazine, and many others. His advertising clients include Aston Martin, Rolls-Royce, BMW, and Toyota, among others. James is the author of the Motorbooks titles How to Photograph Cars and Art of the Formula 1 Race Car. He lives in Dorset, England. Frank Stephenson is one of the most distinguished automotive designers of his generation. His career began with BMW, where he designed the X5 model as well as the wildly popular re-imagining of the MINI Cooper in 1999. Moving on to Ferrari and Maserati, Stephenson penned the Ferrari 612 and 430, as well as the Maserati Quattroporte and MC12 before becoming design director for Fiat/Lancia and then Alfa Romeo. While there he led the design of the new Fiat 500, the Alfa Mito, and the Fiat Bravo. Stephenson joined McLaren Automotive as design director in 2008, where his first project was the design of the firmÆs new supercar, the MP4-12C.