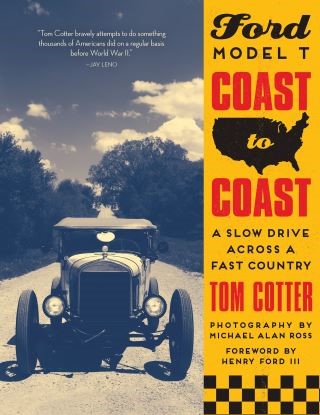 A Slow Drive across a Fast Country

Automotive writer Tom Cotter undertakes a coast-to-coast road trip in an ancient Ford Model T. As the world embraces self-driving cars, what's it like to drive cross-country in the first mass-produced car?

Tom Cotter: Tom Cotter writes regularly for Road & Track, and has a deep-seated love for automotive rescue. One of his best-known saves, a neglected Shelby Cobra, was chronicled by Peter Egan in Road & Track. Tom has been in and around cars all of his life, and built up one of the most successful PR agencies in motorsports, with a client list that includes Lowe's, McDonalds, Mercedes-Benz, Ford, Dodge, Pontiac, BMW, John Deere, UPS, General Foods, Sears, and that Speed. The lifelong auto enthusiast is co-chairman of the Amelia Island Concours d'Elegance. Cotter resides in Davidson, North Carolina, with his family and a garage full of collector cars.

Tom Cotter has been involved in nearly every end of the automotive and racing industries over the span of his career. From mechanic and auto salesman to heading the public relations department at Charlotte Motor Speedway, Cotter formed his own racing and automotive PR and marketing agency, Cotter Group. The agency represented some of the largest clients in NASCAR, IndyCar/CART, drag racing, and road racing. He has written biographies of the legendary Holman-Moody race team, Tommy Ivo and Dean Jeffries, but is best known for his series of barn find books, such as Cobra in the Barn, 50 Shades of Rust, and Barn Find Road Trip. Cotter appears in the Barn Find Hunter video series, which is distributed by Hagerty Insurance. He teaches public relations at Belmont Abbey College, sits on the advisory board of McPherson College’s Auto Restoration program, and is a member of the Road Racing Driver’s Club (RRDC). He lives in Davidson, North Carolina.