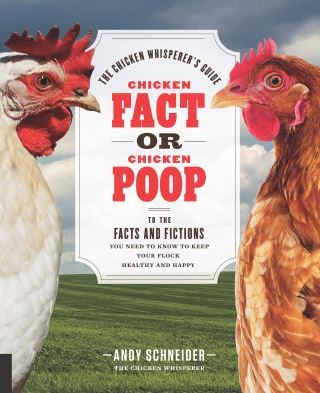 This science-rooted, fact-based, and study-reinforced book is loaded with information to help you weed through the facts and fictions about your flock.

Andy Schneider: Andy Schneider, better known as the Chicken Whisperer, has become the go-to guy for anything chickens. Over the years, he has helped a countless number of people start their very own backyard flocks. He is not only a well-known radio personality, as host of the "Backyard Poultry with the Chicken Whisperer" radio show, but also a contributor for Mother Earth News, Grit Magazine, and Farmers' Almanac. He is the national spokesperson for the USDA-APHIS Bio-Security for Birds Program. He is the Founder/Organizer of the Atlanta Backyard Poultry Meetup Group and many other Meetup Groups around the United States. He has been featured on CNN, HLN, Fox, ABC, CBS, NBC, NPR, as well as in The Wall Street Journal, Time Magazine, The Economist, USA Today, New Life Journal, and other local and national publications. Andy has also been traveling around the U.S. on the Chicken Whisperer Tour, educating people about the many benefits of keeping a small backyard flock of chickens. Andy and his wife Jen keep 35 chickens on their property just north of Atlanta, Georgia. Visit him online at http://www.chickenwhisperer.com.