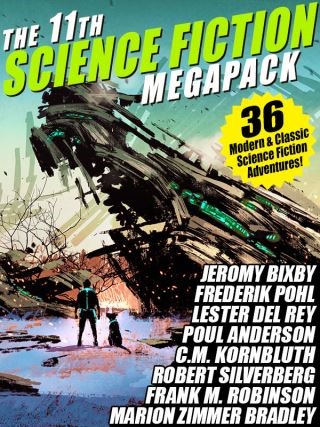 Welcome to The 11th Science Fiction MEGAPACK®! We hope you will enjoy the stories we have selected for you this time. There's a greater emphasis than usual on Golden Age writers (just the way it came together) -- but we have one original story as well, a posthumous collaboration with H.B. Fyfe, finishing a really terrific but not-quite-done tale he had been working on before his death. It's a bit reminiscent of James Tiptree, Jr.'s best work -- but predates Tiptree by a couple of decades. And we have novels by Robert Silverberg, Frederik Pohl & C.M. Kornbluth, Murray Leinster, E. Everett Evans, and Donald Wollheim...not to mention part 2 of our serialization of Tony Rothman's mammoth 2013 novel, Firebird. And a ton of great short stories. 36 works in all, more than 1900 pages of great reading!

ANGELS IN THE JETS, by Jerome Bixby
A CODE FOR SAM, by Lester del Rey
STAR SHIP, by Poul Anderson
THE WELL-OILED MACHINE, by H.B. Fyfe
JACK OF NO TRADES, by Evelyn E. Smith
THE GRAVITY BUSINESS, by James E. Gunn
DOOMSDAY EVE, by Robert Moore Williams
MASTER OF LIFE AND DEATH, by Robert Silverberg
FALCONS OF NARABEDLA, by Marion Zimmer Bradley
NEW LAMPS, by Robert Moore Williams
THE PIRATES OF ZAN, by Murray Leinster
OUT OF THE IRON WOMB!, by Poul Anderson
LATER THAN YOU THINK, by Fritz Leiber
THE PLANET MAPPERS, by E. Everett Evans
AFTERGLOW, by H.B. Fyfe and John Gregory Betancourt
SHIPPING CLERK, by William Morrison
CONTAGION, by Katherine MacLean
THE LIGHT ON PRECIPICE PEAK, by Stephen Tall
THE LUCKIEST MAN IN DENV, by Simon Eisner
ON THE FOURTH PLANET, by J.F. Bone
BIMMIE SAYS, by Sydney Van Scyoc
SWEET TOOTH, by Robert F. Young
SEARCH THE SKY, by Frederik Pohl and C. M. Kornbluth
STAR, BRIGHT, by Mark Clifton
HOT PLANET, by Hal Clement
TWO WEEKS IN AUGUST, by Frank M. Robinson
THE ALIEN, by Raymond F. Jones
BODYGUARD, by Christopher Grimm
JAYWALKER, by Ross Rocklynne
SECOND CHILDHOOD, by Clifford D. Simak
OF ALL POSSIBLE WORLDS, by William Tenn
POLLONY UNDIVERTED, by Sydney Van Scyoc
DELAY IN TRANSIT, by F. L. Wallace
A GIFT FROM EARTH, by Manly Banister
ONE AGAINST THE MOON, by Donald A. Wollheim
Special Feature: FIREBIRD, by Tony Rothman [Part 2 of 3]

If you enjoy this volume of classic stories, don't forget to search your favorite ebook store for "Wildside Press Megapack" to see the 270+ other entries in this series, including science fiction, fantasy, mysteries, adventure, horror, westerns -- and much, much more!