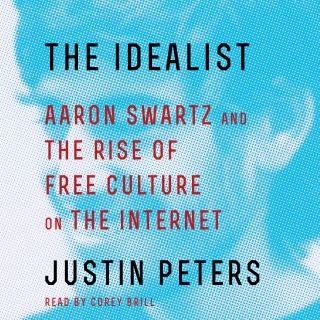 Aaron Swartz and the Rise of Free Culture on the Internet

Aaron Swartz was a zealous young advocate for the free exchange of information and creative content online. He committed suicide in 2013 after being indicted by the government for illegally downloading millions of academic articles from a nonprofit online database. From the age of fifteen, when Swartz, a computer prodigy, worked with Lawrence Lessig to launch Creative Commons, to his years as a fighter for copyright reform and open information, to his work leading the protests against the Stop Online Piracy Act (SOPA), to his posthumous status as a cultural icon, Swartz’s life was inextricably connected to the free culture movement. Now Justin Peters examines Swartz’s life in the context of 200 years of struggle over the control of information.

In vivid, accessible prose, The Idealist situates Swartz in the context of other “data moralists” past and present, from lexicographer Noah Webster to ebook pioneer Michael Hart to NSA whistleblower Edward Snowden. In the process, the book explores the history of copyright statutes and the public domain; examines archivists’ ongoing quest to build the “library of the future”; and charts the rise of open access, the copyleft movement, and other ideologies that have come to challenge protectionist intellectual property policies. Peters also breaks down the government’s case against Swartz and explains how we reached the point where federally funded academic research came to be considered private property, and downloading that material in bulk came to be considered a federal crime.

The Idealist is “an excellent survey of the intellectual property battlefield, and a sobering memorial to its most tragic victim” (The Boston Globe) and an essential look at the impact of the free culture movement on our daily lives and on generations to come.

Justin Peters: Justin Peters is a correspondent for Slate and a contributing editor at the Columbia Journalism Review. He has written for various national publications, including The New York Times, The Washington Monthly, and Travel + Leisure, and was the founding editor of Polite, a general-interest print journal. An alumnus of Cornell University and the Columbia University Graduate School of Journalism, he divides his time between Boston and Brooklyn.