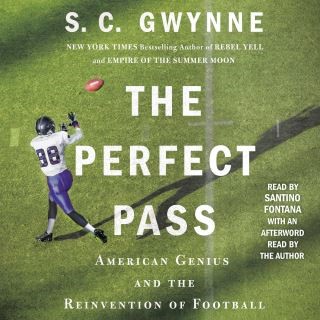 American Genius and the Reinvention of Football

An “excellent sports history” (Publishers Weekly) in the tradition of Michael Lewis’s Moneyball, award-winning historian S.C. Gwynne tells the incredible story of how two unknown coaches revolutionized American football at every level, from high school to the NFL.

Hal Mumme spent fourteen mostly losing seasons coaching football before inventing a potent passing offense that would soon shock players, delight fans, and terrify opposing coaches. It all began at a tiny, overlooked college called Iowa Wesleyan, where Mumme was head coach and Mike Leach, a lawyer who had never played college football, was hired as his offensive line coach. In the cornfields of Iowa these two mad inventors, drawn together by a shared disregard for conventionalism and a love for Jimmy Buffett, began to engineer the purest, most extreme passing game in the 145-year history of football. Implementing their “Air Raid” offense, their teams—at Iowa Wesleyan and later at Valdosta State and the University of Kentucky—played blazingly fast—faster than any team ever had before, and they routinely beat teams with far more talented athletes. And Mumme and Leach did it all without even a playbook.

“A superb treat for all gridiron fans” (Kirkus Reviews, starred review), The Perfect Pass S.C. Gwynne explores Mumme’s leading role in changing football from a run-dominated sport to a pass-dominated one, the game that tens of millions of Americans now watch every fall weekend. Whether you’re a casual or ravenous football fan, this is “a rousing tale of innovation” (Booklist), and “Gwynne’s book ably relates the story of that innovation and the successes of the man who devised it” (New York Journal of Books).

S. C. Gwynne: S.C. Gwynne is the author of the New York Times bestsellers Rebel Yell and Empire of the Summer Moon, which was a finalist for the Pulitzer Prize and the National Book Critics Circle Award. He spent most of his career as a journalist, including stints with Time as bureau chief, national correspondent, and senior editor, and with Texas Monthly as executive editor. He lives in Austin, Texas, with his wife.