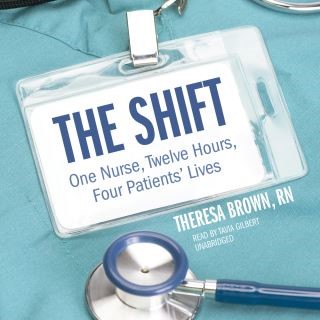 In a book as eye-opening as it is riveting, practicing nurse and New York Times columnist Theresa Brown invites us to experience not just a day in the life of a nurse but all the life that happens in just one day in a hospital's cancer ward. In the span of twelve hours, lives can be lost, life-altering medical treatment decisions made, and dreams fulfilled or irrevocably stolen. In Brown's skilled hands-as both a dedicated nurse and an insightful chronicler of events-we are given an unprecedented view into the individual struggles as well as the larger truths about medicine in this country. By shift's end, we have witnessed something profound about hope, healing, and humanity.Every day, Theresa Brown holds patients' lives in her hands. On this day there are four: Mr. Hampton, a patient with lymphoma to whom Brown is charged with administering a powerful drug that could cure him-or kill him; Sheila, who may have been dangerously misdiagnosed; Candace, a returning patient who arrives (perhaps advisedly) with her own disinfectant wipes, cleansing rituals, and demands; and Dorothy, who after six weeks in the hospital may finally go home. Prioritizing and ministering to their needs takes the kind of skill, sensitivity, and, yes, humor that enable a nurse to be a patient's most ardent advocate in a medical system marked by heartbreaking dysfunction as well as miraculous success.

Theresa Brown works as a clinical nurse. Her regular column appears on the New York Times opinion pages as well as on the Times Opinionator blog. She has also been a contributor to the popular Well section of that paper and writes for CNN.com and other national media. Brown received her BSN from the University of Pittsburgh and, during what she calls her past life, a PhD in English from the University of Chicago. Before becoming a nurse, she taught English at Tufts University. Today her focus is medical oncology and end-of-life issues. She lectures nationally, is a board member of the Center for Health, Media, and Policy at the Hunter-Bellevue School of Nursing at the City University of New York's Hunter College. Brown was a panelist for TEDMED's Great Challenges of Health and Medicine initiative and is also involved in the Robert Wood Johnson Foundation's Flip the Clinic initiative and an advisory board member for Scrubs magazine. She lives with her husband and three children in Pennsylvania.

Tavia Gilbert, an acclaimed narrator of more than four hundred full-cast and multivoice audiobooks for virtually every publisher in the industry, is an eight-time nominee for the Audie Award and the recipient of thirteen Earphones Awards, a Voice Arts Award, and a Listen-Up Award. With frequent inclusion on best of year and annual top ten lists, she is a trusted and increasingly sought-after actress for work across every genre, from children's and YA, to literary fiction, nonfiction, and genre fiction. Audible has named her a Genre-Defining Narrator: Master of Memoir, and Library Journal said of her, "as close as you can get to a full-cast narration with a solo voice." She is a producer, singer, photographer, and a writer, as well as the cofounder of a feminist publishing company, Animal Mineral, with fiction and nonfiction focusing on relationships, love, and identity.