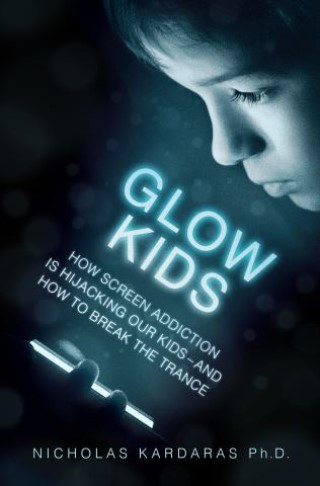 We’ve all seen them: kids hypnotically staring at glowing screens in restaurants, in playgrounds and in friends' houses—and the numbers are growing. Like a virtual scourge, the illuminated glowing faces—the Glow Kids—are multiplying. But at what cost? Is this just a harmless indulgence or fad like some sort of digital hula-hoop? Some say that glowing screens might even be good for kids—a form of interactive educational tool.

In Glow Kids, Dr. Nicholas Kardaras will examine how technology—more specifically, age-inappropriate screen tech, with all of its glowing ubiquity—has profoundly affected the brains of an entire generation. Brain imaging research is showing that stimulating glowing screens are as dopaminergic (dopamine activating) to the brain’s pleasure center as sex. And a growing mountain of clinical research correlates screen tech with disorders like ADHD, addiction, anxiety, depression, increased aggression, and even psychosis. Most shocking of all, recent brain imaging studies conclusively show that excessive screen exposure can neurologically damage a young person’s developing brain in the same way that cocaine addiction can.

Kardaras will dive into the sociological, psychological, cultural, and economic factors involved in the global tech epidemic with one major goal: to explore the effect all of our wonderful shiny new technology is having on kids. Glow Kids also includes an opt-out letter and a "quiz" for parents in the back of the book.

Nicholas Kardaras: DR. NICHOLAS KARDARAS is one of the country’s foremost addiction experts and Executive Director of the Dunes—one of the world’s top rehabs. He is a Clinical Professor at Stony Brook Medicine, has taught neuropsychology at the doctoral-level, is the author of How Plato and Pythagoras Can Save Your Life (Conari, 2011), and is a frequent contributor to Psychology Today and Fox News.